0
Real Madrid came through their clash with Rayo Vallecano with a hard-earned win in the race for the LaLiga title. A solitary Benzema strike sealed the win in the last game of the year at the Bernabéu and the European champions can now turn their attentions to the trip to the United Arab Emirates, where they will be hoping to get their hands on a third consecutive Club World Cup.

“We have to go out to win it from the first minute, be energetic, stay solid and have the fans behind us”, said Solari in the pre-match press conference. Both team and fans responded to the call in emphatic fashion. Real Madrid were dominant from the off and looked dangerous going forward and their superiority reaped its rewards with just 13 minutes on the clock. Benzema switched the play out to Lucas Vázquez, who then spotted the Frenchman's smart run and threaded a lovely ball in behind the defence, which the striker tucked beautifully into the bottom corner. It's the third goal to have come from the pair in just 18 days.

Chances
Rayo looked to react immediately, and on 16 minutes Embarba sent in a corner which was turned towards goal by Velázquez but the ball flew inches wide of the post. Asensio then had a clearer chance when he was put through one-on-one in the very next move by Kroos' delightful first-time ball, but Dimitrievski stood strong to deny him and keep the deficit at one.

Real Madrid kept probing in a bid to double their advantage and came close to doing so when Velázquez hooked Lucas Vázquez's volleyed effort off the line in the 19th minute. From that point on, the tempo of the game dropped up until Kroos saw his thumping left-footed shot from the edge of the area cannon off the upright with 36 on the clock. The scoreline remain unchanged as the sides went in at the break, despite the hosts deserving more for their efforts.

Ramos goal chalked off
The Whites had the first real chance of the second half. In the 51st minute, a sublime piece of backheel trickery saw Modric evade two visiting defenders, before laying the ball back to Asensio, only for his effort to be parried by the Rayo goalkeeper. The scoreline was the only thing that suggested that this contest was still in the balance, although Madrid came close to putting the result beyond doubt in the 65th minute. Ramos headed home Kroos's free-kick but his effort was ruled out for offside.

Clean sheet
Real Madrid continued to dominate proceedings, with Rayo barely managing to make any inroads into the hosts' box. Benzema was replaced in the 77th minute after feeling some discomfort and on came Vinicius Jr.  In injury-time, Courtois ensured his side took all three points, denying point-blank efforts from Álex Alegría and Velázquez. The Whites held on to their lead to record a seventh shutout in the 11 games under Santiago Solari's stewardship. 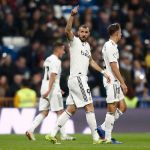