The Whites will discover their last-sixteen opposition in next Monday’s draw.
Santiago Bernabéu

3
Real Madrid were unable to take a positive result from their final game of the Champions League Group Stage. The Whites, who have qualified top of Group G, failed to make the most of their chances and conceded from CSKA Moscow’s three attempts on goal. Solari’s men began the game in dominant fashion, attacking with intent. With 24 minutes gone, the first chance fell to Vinicius Jr., who was lively on the left-hand side, but he was stopped by Akinfeev after a fine piece of play before Asensio fired the rebound on to the crossbar.

The connection between Benzema, Vinicius and Asensio looked sure to produce a goal. The Russian goalkeeper was saving his team time and again though, stopping the Mallorcan ace twice more. CSKA made matters worse with two isolated attempts to make it 0-2 at the break. Chalov opened the scoring on 37 minutes and Schennikov netted the scored six minutes later.

Vinicius Jr. chances
Solari looked for a reaction and brought on Bale for Benzema at the break. Just like in the first half, Vinicius was again the first to threaten the opposition goal and his shot flew narrowly wide (50'). Another great piece of play from the Brazilian from his wing resulted in a deflected shot from Isco. Meanwhile, Kroos came on for Llorente.

Real Madrid’s bad luck continued as they had to play with ten men for a few minutes with Bale suffering discomfort in his ankle. The Welshman did ultimately finish the match and it was Marcelo who gave his place up for Carvajal. The minutes passed and the goal just wouldn’t come. Valverde tried his luck from distance but it was CSKA that got the final goal, making it 3-0 thanks to Sigurdsson (73'). A bad result, but the European Champion will be seeded in the draw next Monday. 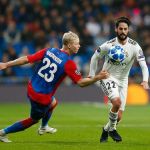