The Whites were unable to continue their four-match winning streak and now turn their attentions to the Roma clash.
Ipurúa

0
Real Madrid were unable to prolong their four-match winning run in Éibar. The game kicked off at break-neck pace with the first chance presenting itself inside three minutes. A long-range strike by Kike García was superbly tipped on to the post by Courtois, and two minutes later Bale responded in kind but his wonderful goal from distance was ruled out for offside.

The chances continued to flow and Real Madrid came close to taking the lead on 11 minutes. Asensio whipped a ball into the box and Benzema expertly took it away from Ramis with his first touch and dinked over Riesgo with his left foot, but Cote was on the line to clear and save his team. Five minutes later and Éibar were in front after a swift counter-attack. Courtois stopped Kike García's effort in the six-yard box but Ceballos was unfortunate as his attempt to clear crashed off Escalante and ended up in the back of the net. The goal stood after a VAR consultation.

Decisive start to the second half
The Whites would have to come from behind and looked to react quickly to take the game into the break all square, but Riesgo pulled off a fine save from Bale with 35 minutes on the clock. The task became harder after the interval when Cucurella stole the ball from Odriozola, who injured himself in the process, and played in Enrich who beat Courtois with a shot across goal after 52’. Four minutes later and they added another with Kike Garcia getting his name on the scoresheet.

The Whites kept going to the end, and a Benzema strike flew just wide with 70 minutes gone. Real Madrid now turn their attentions to Tuesday's Champions League clash with Roma at the Estadio Olímpico. 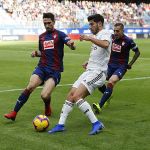