The Frenchman notched the first goal of the night and brought about the second with some sublime play, while Ramos and Ceballos put the gloss on a win at Balaídos.
Balaídos

4
Benzema has said it time and again: “A great striker has to have a good all-round game, not just score goals”. At Balaídos, he showed he can do both. The Frenchman put in a superb display to take Real Madrid to their fourth win in a row. He paved the way to victory with a world class touch to bring the ball under his spell for the first goal and a mesmerising dribble brought about the second after Cabral turned into his own net. Ramos then converted from the spot before Ceballos smashed one into the top corner to seal all three points against Celta and close in on those above them in the table.

A frenetic start to the game yielded three chances inside the first five minutes. Benzema could have put the Whites in front but for a smart Sergio stop, before he then pulled his second attempt wide of the target. The hosts also had their chance when a deflected Boufal shot was nearly turned in by Aspas. Madrid were dominating the ball while Celta bided their time waiting for the counter. The madridistas were unfortunate when an injury to Casemiro after a Maxi Gómez tackle saw him replaced by Ceballos on 19 minutes.

Benzema finds the net
After Okay sent a warning shot when he headed against the post from a corner, Benzema responded to put the Whites ahead. The Frenchman took down a Modric long ball in remarkable fashion on the turn and fired home past Sergio (23’). He then had the chance to make it two moments later but his header was just off target following a fine Reguilón cross. Kroos then enjoyed an even better opportunity but blazed over after more good work from Benzema. The first half finished with Courtois saving well against Brais before Solari was forced into a second change. Javi Sánchez on for Reguilón.


Benzema continued his starring role in the opening exchanges of the second half. He pulled off a marvellous piece of individual skill before hammering a shot straight onto the crossbar.  These were mere warning signs for the second goal which was to come on 56’. Odriozola stole the ball well and slotted a pass in to Benzema. The French wizard proved infallible against the home defender, and his shot was deflected off Sergio before finally being bundled in off the post by Cabral. Celta provided an instant reaction. On 61’, Hugo Mallo fired in with a gilt-edged volley.

Ramos and Ceballos make sure of the points
The game remained wide open and both sides had their chances. Benzema fired inches wide after being set up well by Odriozola at the near post. Aspas then forced Courtois into a diving save. Nacho, who had taken a knock, was forced to make way for Asensio in the 71st minute. Juncà gave away a penalty after a clash with Odriozola and Ramos was as cool as ever, converting to make it 1-3 with a Panenka (83’). Cabral was later sent off following a second yellow (87’). The game was now in the dying minutes, but Ceballos was persistent, putting the cherry on the cake with a magnificent long-range effort (91’). Brais Méndez struck late on for the Galician side, making it 2-4 on 94’. It would stay that way until the final whistle to ensure a special win in Balaídos ahead of the international break. 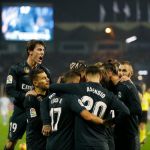