Benzema's goals, the first of which was a spectacular solo play, plus Casemiro, Bale and Kroos' efforts mean a third consecutive win for the European Champions.
Doosan Arena

5
Real Madrid beat Viktoria Plzen to move top of Group G in the Champions League and continue their winning run. The Whites, who were on scoring form in the first half, netting three times, have now won three games in a row, one in each competition they're competing in. They have kept clean sheets in all three games and fired in 11 goals.

Despite that, the Czech champions took to the Doosan Arena pitch playing some stellar, pressing football, coming close to scoring in the ninth minute. Hrosovsky crossed and the ball came off Nacho before hitting the crossbar. Fortunately Courtois was on hand to control the situation. This sparked the European champions in to life, and they were slowly but surely able to hold off the home side.

Benzema on spectacular form
The Whites struck back and with real gusto in the first half. The first goal was sublime effort from Benzema on 21’. The French marksman got the ball on the edge of the box, turning three defenders inside out with his jinking control, before his exquisite shot darted through Hruska'a legs. Two minutes later, Kroos took a corner for Casemiro to bury a header that saw the Whites build on their lead.


That goal proved to be really damaging to the hosts' chances and they went on to concede a further two goals before the break. The madridistas' third of the night came in the 37th minute, with a set piece once again undoing the home defence. Kroos took a short corner to Ceballos, who floated the ball over to the back post, where Bale's cushioned header teed Benzema up for his second of the night as the Frenchman glanced the ball home. Three minutes later, Benzema flicked a Reguilón cross into Bale's path and the Welshman side-footed a fine volleyed effort into the corner of the net.

Champions League bow
The second half began with two chances for Kopic, both of which were expertly kept out by Courtois. Solari then decided to shuffle his pack and introduce Javi Sánchez, who was making his debut in Europe's elite club competition, in place of Ramos, before bringing Vinicius Jr. on for Benzema minutes later.

It was the Brazilian who led the counter-attack that culminated in the team's fifth goal of the game, when he drove into the area, before slipping the ball to Kroos. The German conjured up a sublime chipped finish with his right instep to further extend the Whites' lead in the 67th minute. Madrid could have made it six had the referee not chalked Lucas Vázquez's effort off following a dubious offside decision, whilst Bale's shot came crashing back off the angle between crossbar and post. The Whites claimed a third straight win and attention now turns to the meeting with Celta, which is the side's final outing ahead of the international break 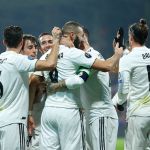