The European champions came out on top at the Stadio Olimpico thanks to goals from Bale and Lucas Vázquez in a fine second-half display.
Olympic Stadium

0
2
The kings of Europe tonight secured their place in the Champions League round of 16. With one game of the group stage to spare, Real Madrid sealed their spot as a top seed in the draw for the next round, which is to be held on 17 December. The Whites clinched their passage with a convincing 2-0 away triumph at Roma, their main rivals in the group. Gareth Bale and Lucas Vázquez were on target in what was a fine second-half performance from Santiago Solari's men.

Roma and Real Madrid had both qualified for the next round before the start of play following CSKA's defeat earlier in the evening. However, top spot was at stake and that was evident from the tempo and intensity served up by both sides right from the outset. Neither team managed to fully dominate proceedings as both sides posed a threat on the opposition's goal. After a fine team move, Luka Modric was the first madridista to test Olsen with an effort in the 20th minute. Roma, who lost El Shaarawy through injury, responded by launching a number of crosses into the box and forcing a string of set pieces.

Chances
On the half-hour mark, the Italians had Solari's troops camped in their area following a barrage of corners. A clear chance for the hosts saw Courtois produce a sharp save from Schick, after which Kolarov contrived to send his effort from distance narrowly wide of the upright. Kroos and Modric replied for Madrid with shots from range that failed to trouble Olsen. In injury time before the interval, Roma won possession in a dangerous area, but Ünder failed to apply the finishing touch as Courtois closed in.


After Roma had let their opponents off the hook on the stroke of half-time, Madrid made no such mistake following the restart, pouncing on a sloppy Fazio back-pass. It was Bale who raced through to latch on to it, bring the ball under his spell and net to make it 1-0 to the visitors (47’). The pace was now relentless, with Zaniolo coming close to responding with a leveller, but his effort was deflected wide by Carvajal. With the scoreline now in Madrid’s favour, spaces began to open up. Bale once again looked to take advantage, skipping in behind the Italians’ back line, but this time he was off target when up against Olsen one-on-one (50’).

Lucas Vázquez strikes
Madrid looked increasingly comfortable as the second half wore on and soon increased their advantage to 0-2. Marcos Llorente stole the ball back and launched a counter-attack which ended as Bale whipped the ball across the box, Benzema's cushioned header picked out Lucas Vázquez, who was left to tap the ball home home (59’). The Whites were now in complete control of the game and continued to look for further goals. Marcelo and Benzema both came close but Olsen was equal to their attempts, before Solari opted to shift things around and brought on Mariano, Valverde and Asensio. The game ultimately finished 2-0 to the visitors, a result which ensures that Real Madrid maintain their flawless record in the Champions League group stage. 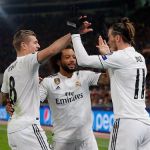