Marcelo scored the goal for the Whites, who had chances to make it 2-2 in the second half.
Camp Nou

1
Real Madrid lost the first Clásico of the season. The Whites, who conceded two goals before the break, reacted at the beginning of the second half but didn’t put away the chances they had to draw level. Real Madrid had the first opportunity of the match when Benzema shot wide after good work from Bale down the left. However, Barcelona took the lead with 11 minutes on the clock as Coutinho scored from a Jordi Alba assist. The Whites went in search of an equaliser with Bale and Marcelo trying to catch Ter Stegen out from distance.

Barcelona continued to cause problems at the other end. In the 19th minute, Rakitic forced a great save from Courtois. The match became more difficult for the side from the Spanish capital when the referee, after consulting VAR, awarded a spot kick after Varane was adjudged to have fouled Luis Suárez. And the Uruguayan stepped up to convert the penalty on the half-hour mark. Despite trailing 2-0, Madrid didn't give up, but they were finding it hard to link up with their forward players. We had to wait for the second half to see the Whites’ reaction, which came in the 50th minute, when Lucas Vázquez, who had replaced Varane at the break, played in Isco whose cross was only half cleared by Lenglet with Marcelo picking up the ball to make it 2-1.

Chances
The whole complexion of the game had now changed, with Lopetegui's charges pouring forward in search of an equaliser. They came close to levelling through Ramos's header and a Modric effort that cannoned back off the post, with the madridistas once again failing to get the rub of the green in front of goal. The hosts sought to respond to the Whites' pressure by feeding Luis Suárez and in the 61st minute, it was the Barça hitman's turn to be denied by the upright.

In stark contrast to the opening 45 minutes, the game had now become an end-to-end contest. On 68', Benzema came close to making it 2-2 with a headed effort from a Lucas centre that flew over the bar. In the 75th minute, Suárez made no mistake when he nodded the ball home from Sergi Roberto's chipped pass. The Uruguayan then made it 4-1 in the 83rd minute to put the result beyond the visitors' reach, before Vidal rounded off the scoring in the 87th minute. Real Madrid enjoyed a fine spell at the start of the second period but ultimately ended up coming away from the Camp Nou empty-handed. 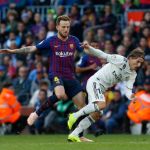