1
Real Madrid recorded an important win against Viktoria Plzen in the sides' Champions League Matchday 3 encounter. A first-half header from Karim Benzema and a Marcelo strike after the break secured the spoils for the Whites, who created chances right from the first whistle. The first opening came in the third minute, when Casemiro flicked on Toni Kroos's corner into Sergio Ramos's path, but the captain was unable to keep his header down. The Whites appeared to be enjoying the upper hand on set pieces and just two minutes later, the German sent over another flag kick and, on this occasion, the skipper came the width of the post away from breaking the deadlock with a towering header.

Madrid had the game right where they wanted it, although Viktoria Plzen were next to sound a warning. Keylor Navas did excellently in a one-on-one in which Petrzela threatened from a rather tight angle in the 11th minute. The holders hit back immediately and took the lead in the very next move. A sumptuous cross from Lucas Vázquez, tonight operating in a right wing-back role, was brilliantly finished off by Benzema's header.

Chances
The opening goal saw the pace of the contest drop and the visitors nearly capitalised on the half-hour mark, but Limbersky's chipped effort when clean through on Navas narrowly missed the target. In the next move, Benzema had a chance to double the hosts' advantage. The Frenchman brought a long pass under his spell, before getting the better of Hejda, who was left grounded, but Hruska came out on top in the one-on-one.


The two chances that came for Isco next were to be even clearer. The Spain international was smart as ever, intercepting a pass from the Czech keeper on 36’ to then try a chip shot which ended up wide of the mark. A minute later, the man from Málaga had another opportunity. This time it was a move straight off the training ground in a deadball situation. Kroos took the corner, Isco struck it first time and forced Hruska into action. It was the visitors however, who took the final swing before the break. Reznik crossed in for Hrosovsky, who had it all on a plate, but sent the ball careering over the crossbar.

Superb strike from Marcelo
Just as the first half ended with a chance for the visitors, the second was no different for the Czechs. Krmencik arched in a cross but Havel’s acrobatic strike was fruitless on 51 minutes. That was where Viktoria Plzen ran out of luck because four minutes later Marcelo put the Whites further ahead. It was a precise, beautiful piece of play. Valverde, who came on for Isco on 54’, made his madridista debut, combining well with Bale and passed brilliantly to the Brazilian. The spectacular chipped finish rounded off a sublime moment in the game.

Real Madrid were not looking to settle and wanted more. Bale wanted to get his name on the scoresheet. His blasted shot from the edge of the box on 69' didn't threaten the goal and then after, Hruska was not to beaten in the one-on-one. It seemed like a third goal was imminent but eventually Viktoria Plzen cut the deficit on 78’ with a stunning piece of play from Hrosovsky. In the closing minutes Marcelo had to come off with an injury, but the Whites held onto the win and the three vital points to stay level with Roma at the top of Group G. Now the team must focus on the weekend, and El Clásico. 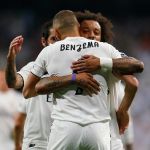