Marcelo scored the Real Madrid goal in a contest in which the team were denied by the woodwork on three occasions and found Oier in formidable form.
Santiago Bernabéu

2
Real Madrid slipped to defeat against Levante on an afternoon when they deserved more. The Whites, who conceded twice inside the opening 15 minutes, were tireless in their efforts to stage a comeback but their luck was out as they came up against an inspired performance from Oier and were three times denied by the woodwork. The afternoon became an uphill struggle for the hosts with just six minutes on the clock, when Morales latched onto Postigo's raking pass and got in behind the defence, before rounding Courtois and slipping the ball into an empty net. In the 13th minute, the referee awarded a free-kick for a handball outside the area from Varane but he changed his decision after consulting the VAR and pointed to the spot, with Roger stepping up to double the visitors' advantage.

From that moment on, Julen Lopetegui's charges poured forward as they sought to engineer a way back into the game and they went on to muster a number of clear-cut chances. However, lady luck wasn't smiling on the madridistas. In the 18th minute, the referee ruled out an Asensio goal for offside after having referred to the VAR. The Majorca-born attacker had poked the ball home from close range after Casemiro's effort cannoned back off the crossbar. In the 21st minute, some fine link-up play between Asensio and Lucas culminated in the Galician wideman getting a shot off, only for Oier to parry his effort away. The madridistas were looking their most threatening from set pieces, with Ramos thwarted by the visitors' goalkeeper after getting his head onto a corner.

Real Madrid continued playing with pace and delivering crosses in to the box, which left them vulnerable on the counter-attack. In the 34th minute, a Mariano header from a cross hit the bar and Casemiro tested Oier from the rebound. Then, it was Lucas’s turn as he shot from inside the area, but Oier was on the spot to save his team. On the stroke of half-time, a Levante counter ended in Rochina's goal, but the referee ruled it out as Toño was in an offside position.

The second half started in the same fashion. Madrid went in search of a goal as Levante sat back. Bale replaced Odriozola to add more firepower up top and Modric had a good chance in the 50th minute but his shot went wide after a deflection off Rober Pier. Lopetegui made his last change in the 60th minute, bringing on Benzema and Ceballos. Meanwhile, Madrid kept plugging away. Two consecutive shots from Bale and Benzema were kept out by Oier. The visiting goalkeeper was in action again to deny the Welshman on 65'.

Marcelo's goal
In the 72nd minute, Marcelo received from Benzema and got the goal the Whites deserved with a powerful right-footed shot. The side continued to probe but were unable to find a way through. On 76', Benzema's effort made it three times that the hosts had been denied by the frame of the goal. There was little left time left, but Madrid did not give up. Modric and Marcelo tried their luck from the edge of the area, Benzema to fire one home from the left and Mariano was getting on the end of everything. The striker had the ball in the net with 89 minutes on the clock but it was chalked off for offside. The Whites gave everything, but Levante took the points. 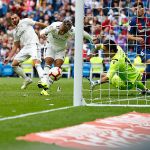