CSKA's second-minute goal altered the whole complexion of an encounter in which the team failed to find the net, with Casemiro, Benzema and Mariano all being denied by the woodwork.
Luzhniki Stadium
1

0
Real Madrid were on the receiving end of what was a harsh result at Moscow's Luzhniki Stadium. The Whites succumbed to a 1-0 away defeat to CSKA, with the whole complexion of the contest altered by Vlasic's second-minute strike. After going behind, Lopetegui's men dictated the play and carved out the best of the chances. The closest Madrid came to scoring was when Casemiro, Benzema and Mariano were all denied by the frame of the goal. However, ultimately the team failed to muster a goal and now have to focus on the back-to-back meetings with Viktoria Plzen.

This encounter became an uphill struggle for Madrid with barely two minutes on the clock. Vlasic pounced to intercept a Kroos pass into his own half and the forward cut inside Varane before firing past Keylor. Now behind in the game, Real Madrid looked to respond and gradually began to boss proceedings. Kroos tried his luck from range and a headed effort from Ceballos represented the first real inroads on Akinfeev's goal. CSKA were well organised at the back and sought to regain possession and make the most of their pace on the counter.

The woodwork intervenes
With Madrid now completely dominating, Casemiro drilled in an effort from the edge of the area in the 28th minute which rattled the post. The Whites were playing the ball around patiently and looked to Lucas Vázquez on the wing in a bid to unlock the hosts' backline. In the 40th minute, the home side once again benefited from some good fortune, when Benzema's header from Reguilón's fine centre came back off the crossbar. The Whites, who, despite their dominance, headed in at half-time a goal down, lost Carvajal in the 43rd minute after he'd felt some discomfort and had to be replaced by Odriozola .


The half time talk did not have the desired effect on the game. Real Madrid went on the prowl in search of an equaliser, but CSKA held strong in defence. Asensio tested Akinfeev with an adventurous shot from afar and then Benzema followed up, sending in a wild shot from the edge of the box. The goal just wouldn’t come, so Lopetegui used up his remaining two substitutes on 58’, sending on Mariano and Modric as reinforcements. The Whites persisted as always, with crosses raining in from the full-backs which were met with little response. On 74’, Kroos tried his luck, sending in a thunderbolt strike from long range that went slightly wide. Just two minutes later, it was Bijol’s turn to trouble the goalkeeper, with Keylor having to prove his mettle.

Final siege
Time was running out fast, but Real Madrid would not be turned away yet. Mariano stabbed in a shot in the box and Ceballos forced the hosts' custodian into a diving save. Modric connected well just after, getting his head onto a loose ball. On 90’, Mariano threw himself into another brave header, but the effort hit the post, the third of the night for the Whites. Varane made one final push in extra time, heading straight past Akinfeev’s goal. The goalkeeper was sent off moments later for a second yellow card. Despite some gaping chances, lady luck did not side with Real Madrid in Russia tonight. 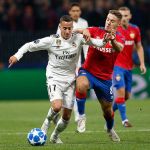