Alavés clinched a win over Real Madrid with a goal at the death.
Mendizorroza

0
Real Madrid could not capitalise at Mendizorroza. They couldn’t find a goal against Alavés whose intensity led to them scoring at the death. The Whites’ quick tempo at the start suggested that things might go their way. Ceballos had a chance on 5’ but his shot at the near post was caught by Pacheco, who stretched to cut out the danger. Just four minutes later it was Odriozola, who was clever with his arcing cross. Benzema got his head on it, beating the keeper, but Laguardia was on the line to clear the danger.

Alavés had their chances too, and a great one came when Jony crossed on 26’, the ball flew across goal, where Calleri was waiting at the back post to knock it back into the danger zone but Varane was on hand to ensure Ibai was unable to get his shot away. Lopetegui brought on Mariano for Benzema at half-time. The first chance following the break fell to the visitors, but Casemiro’s strike from the edge of the box ended up in the gloves of Pacheco on 52 minutes. Duarte looked to strike back just seven minutes later, but Courtois produced a superb diving stop to keep out his long-range effort.

Asensio came on for Casemiro on 62’ and Real Madrid continued to dominate, but Álaves did come close to scoring with a swift break away, though Jony was unable to finish off the move, shooting too far across goal when through one-on-one with Courtois on 77’. Two minutes later and the madridista arrived, when Bale hit the target with a sweetly-struck free-kick but Pacheco was right behind it. Not long after, the Welshman made way for Vinicius. The Whites pushed on to the end in search of the goal, but then, Manu García popped up to net and seal the points for his side in the dying seconds. 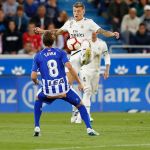