Benzema, Asensio, Odriozola and Cristo got the goals against Melilla in Solari's first game on the bench.
Álvarez Claro

4
Mission accomplished in the Copa del Rey, as Real Madrid enjoyed a convincing 0-4 win on their first competitive visit to Melilla. Solari made his first appearance on the Whites' bench in impressive fashion as the team all but clinched their place in the last-sixteen ahead of the second leg at the Bernabéu in December. Benzema, Asensio, Odriozola, who also provided two assists, and Cristo got the goals, while Vinicius Jr. was also in fine fettle, getting in on the assists himself.

Roared on by the home fans, Melilla looked dangerous early on. A vicious Ruano cross and a one-on-one chance for Igor Martínez threatened Keylor Navas' goal in the opening exchanges. Slowly though, Real Madrid began to quell the home side's early vigour and take control of the ball. With 23 on the clock, Lucas Vázquez forced Dani Barrios into a fine stop from the edge of the area. It was a warning shot, with the 0-1 arriving just five minutes later when Benzema turned home with ease, following up on Odriozola's effort from the right.

A goal for Asensio
Madrid were not going to settle for just one goal, and continued to enjoy a number of chances before the break. As spaces began to open up in the home defence, Vinicius Jr came to the fore. A wonderful piece of link-up between the Brazilian ace and Asensio came close to yielding the second goal, but Lucas Vázquez's resulting shot was saved. The Galician winger had a further two attempts in quick succession but just couldn't make them count. As 45 minutes ticked around, Asensio did make it 0-2 when he latched on to a superb Vinicius pass with the outside of his boot.


The second half began and Real Madrid made two changes as Ramos and Benzema were replaced by Nacho and Valverde. Melilla set out to surprise the Whites during the early stages as they did in the first half. Keylor was forced to clear a dangerous Igor Martinez cross from the right. But just like in the first period, Real Madrid took control from the 60 minute mark as Ceballos and Llorente looked for the third, but their shots were kept out by the home goalkeeper.

Odriozola and Cristo
With 72 minutes on the clock Vinicius almost got the goal of the game. After receiving a pass from Asensio inside the area, he brought the ball down and struck a powerful shot that smashed against the crossbar. Meanwhile, Melilla didn’t give up. Ruano tried to reduce the deficit before Odriozola made it 3-0 to the Whites with 79 minutes on the clock. The full back turned the ball home from Vinicius after a clearance by Dani Barrios. Cristo, who had replaced Asensio, scored the final goal of the game to make it 4-0 on his first-team debut after another assist from Odriozola (92'). The Whites get their cup campaign off to a bright start. 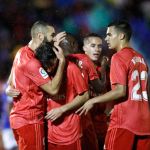