The Whites are set to take on CSKA in the second Champions League Group Stage match (9pm CEST).
Real Madrid are now in Moscow ahead of this Tuesday's clash with CSKA in their first away game of this Champions League campaign (9pm CEST). The Whites' travelling party, with 20 players in the squad, left from Adolfo Suárez Madrid-Barajas airport and landed in the Russian capital just after 9:30pm local time (8:30pm CEST).

On Monday, Julen Lopetegui's men will train at the Luzhniki Stadium to put the finishing touches in place ahead of the second match in the Champions League Group Stage. The Under-19s are travelling alongside the first team ahead of their Tuesday afternoon clash (1pm) against CSKA in the UEFA Youth League. 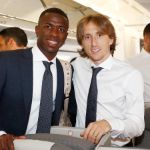