The Whites got the better of Leganés with a Benzema double, the first of which was given following a VAR consultation, and goals from Bale and Ramos.
Santiago Bernabéu

1
LaLiga match day three saw the third win of the season for Real Madrid, who continue to look unstoppable in the competition as they romped to another convincing score-line ahead of the first international break of the season. Lopetegui’s men once again put on a fine show at the Santiago Bernabéu to beat Leganés in a game which also saw Thibaut Courtois make his debut in goal. Benzema hit a brace, the first of which was given following a VAR consultation, and goals from Bale and Ramos made sure the team continued their superb form.

The Whites were in control from the off, looking patient in their play as they probed looking for gaps in the visiting defence. The chances didn’t take long to arrive, as Marcelo threaded a fine pass in behind the defence but Asensio’s touch just got away from him as Cuellar came across to snuff out the danger on 5 minutes. Then just a few minutes later, Benzema came agonisingly close to turning a Bale cross from the left-hand side into the back of the net.

Bale’s goal
The madridista dominance reaped its reward with 17 minutes on the clock. Following a prolonged spell of possession, Sergio Ramos sent a long pass out to the right flank, where Carvajal nodded the ball back across the box to Bale who smashed in a right-footed effort which was too much to handle for the visiting goalkeeper. It was the Welsh forward's third goal this campaign and he really looks to have found his shooting boots in LaLiga 18/19.

But Leganés pushed on, and in one of their first approaches to Courtois’ area, they were awarded a penalty which levelled proceedings. Carrillo made no mistake on 23’, and Real Madrid would be forced to react if they were going to take all three points. Half-time came around and it was all square, but Cuéllar had to boot away a Benzema effort after Asensio sent in a great cross on 42’.

Suspense as the second goal is given
The second Whites’ goal came just as the whistle had gone at the start of the second period. It was a moment of real uncertainty as Benzema fired in a blistering header after more Asensio magic on 48’, but the referee suspected the Frenchman of pushing Silva and ruled it out. VAR was called into play though, and ultimately the goal was given.

A masterclass to finish off
Far from relaxing into the closing stages, Real Madrid maintained a breakneck pace and gave their opposition no chance at all. Kroos had his shot well parried on 58’, before Benzema finally got his well-earned brace: the French star blasted a shot across Cuéllar on 61’ following a superb one-two with Modric. Just a few minutes later, Bustinza brought Asensio down in the box, and so naturally Sergio Ramos  was on hand to bury the penalty and round off a stellar performance. 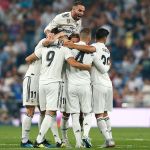