0
The kings of Europe were back to impose their rule of law once again as the Champions League 2018/19 got underway. The champions for the last three seasons running started out with a spectacular win over Roma at the Santiago Bernabéu. A wonderful Isco free-kick, a superb effort from Bale after a blistering run, and a Mariano strike whipped into the top corner from outside the box sealed a convincing result in a game the madridistas dominated from start to finish. Lopetegui's men put on a real show for the home fans, full of fine attacking football, great link-up play and goals.

The Whites came out in authoritative fashion from the first whistle. Bale fired the first warning shot just three minutes in when he was found by a fine Kroos pass. Madrid were playing at an impressive pace, showing real intensity, and the chances were flowing as a result. On 8’, Isco was played in my Modric and forced Olsen into a good stop. It was one-way traffic as the madridistas looked for the opening goal any way they could. Marcelo and Carvajal were rampant on both wings, Kroos swung in corner after corner and Marcelo and Bale both tried their luck from distance.

The clock ticked on and Real Madrid continued to dominate the ball and the shot count. In the 38th minute, a vicious cross from Marcelo was sent out by Olsen for a corner, which was met superbly by Ramos but the Swedish keeper was equal to it. On the stroke of half-time, though, the reward did finally arrive when Isco opened the scoring with a fantastic whipped free-kick from the edge of the box. It was 1-0 at the break and the Whites' 17 shots were testament to the fact it could well have been more.


The second half started in the same vein. The Whites were bossing proceedings but Roma pushed forward making advances on the Real Madrid area. Ünder forced a save from Keylor before Bale hit back with two consecutive chances, the second striking the crossbar. The action showed no signs of slowing as Olsen blocked a shot from Modric and Keylor saved from De Rossi. With more spaces behind the Italian back line, there was always going to be chance for a Bale special. The Welshman, an expert in taking advantage of space, received a magnificent pass from Modric in behind the defence and made it 2-0 with a shot across goal (58').

Mariano debut
Lopetegui brought on Asensio and Mariano, playing his first minutes since his return. Meanwhile, Kolarov again tested Navas but Madrid were still creating chances at the other end. Casemiro tried his luck from outside the box, Asensio shot wide and Kroos forced the best out of Olsen. The fans were enjoying an open and exciting game.

Asensio almost got the goal of the night after fine skill inside the area, but the goalkeeper denied him on this occasion. With five minutes left, Modric was substituted, drawing an ovation from the Bernabéu crowd, with Ceballos on in his place. When it seemed the match was all over, Mariano added the finishing touch to a perfect night. In injury time, he received the ball outside the area, cut inside and sent a missile in to the top corner. The European champions are back in style. 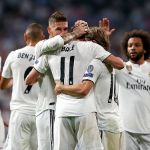