Real Madrid unable to maintain their unbeaten run in LaLiga and now turn their attentions to the derby.
Ramón Sánchez Pizjuán

0
Real Madrid broke their unbeaten run at the Sánchez-Pizjuán. The Whites were undone as Sevilla scored early on, rifling in three in total before the break. The Whites could not capitalise on their chances. The hosts played at a high tempo from the off and the on-form André Silva forced Courtois to prove his worth.

Real Madrid tried to get the ball to their forwards, but the Andalusian side were dangerous and they went ahead on 17’. Navas set up André Silva, as he slotted home from inside the box. Four minutes later, a counter-attack led to the second goal. Courtois parried out a Navas shot but it was turned goalwards by André Silva.

Bale hits the post
The Whites needed to react and on 23’, Bale broke away from the defenders and lashed a shot onto the post from the edge of the box. It was then Kroos who tired his luck from long range. Franco Vázquez was next to fire off a shot, rattling the Real Madrid crossbar. On 39’, The Argentine midfielder saw his man off to turn provider for Ben Yedder, who made no mistake to send his side 3-0 ahead. The Whites did not let up and tried again to close down their rivals. Bale would not be dissuaded, trying yet again to fire home to no avail before half time.

Modric’s disallowed goal
Real Madrid pushed up higher when they came out after the break and with 55 minutes on the clock, the referee ruled out a Modric goal for offside upon consultation with VAR. The Croatian ace immediately tried his luck once again in the next move of the match, but Vaclík kept him out brilliantly. Sarabia then did just the same up the other end, forcing Courtois into a superb stop. Lopetegui brought on Lucas and Mariano and Madrid began to look better as the second half wore on, with Bale going all out for a goal. The Welshman was put through one-on-one only to be denied by the goalkeeper, before smashing a shot just wide a short while later. With the three changes already made, Marcelo had to come off with discomfort towards the end of the game and the numerical disadvantage snuffed out any of the Whites’ remaining hopes. Attentions now turn to the derby at the weekend. 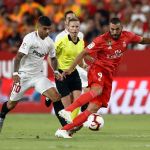