The Majorca-born star's goal ensured Real Madrid got their fourth league win, as Odriozola made his debut.
Santiago Bernabéu

0
Real Madrid beat Espanyol at the Santiago Bernabéu and got their fourth win in the five LaLiga games they’ve played. Asensio fired in before the break and that goal was proof of the Whites’ dominance, as they continue an unbeaten run in the competition.

Real Madrid dominated from the word go, as they looked for the first goal and when they weren’t on the ball, they were pressing hard to get it back. The first chance came on 5’. Odriozola, who was making his official debut with the Whites, rocketed a cross in for Isco to strike it from the penalty spot, but he was off target. Espanyol fought back nine minutes later, when Piatti capped off a counter-attack by hitting a shot from the edge of the box, only to see his effort balloon wide.

A psychological goal
Just after the half hour mark, Isco took a corner and Casemiro tried a header which narrowly missed the target. Espanyol tried their luck again on minute 36 and in yet another counter-attack Hernán Pérez got past Ramos in a one-on-one, only to be denied by a great Courtois intervention. Just when it looked like it would be level at the break, Asensio dealt the Catalan side a psychological blow. The Spain international latched onto a Modric rebound and Diego López could not keep out his gilt-edged shot. Asensio’s position required VAR, which saw the madridistas’ goal approved.

The second half kicked off with an early chance for the European champions. Modric’s left-footed strike from inside the six-yard box forced Diego López into a fine stop on 48’. Just a minute later and Isco dug out a beautiful curling effort from the edge of the area which skimmed the outside of the visitors’ post. The goal which would have meant some breathing space for the madridistas continued to evade them, and Lopetegui reacted by bringing on Mariano and Lucas Vázquez in place of Benzema and Ceballos.

Second clean sheet in a row
The clock ticked on, and with 65 minutes gone Borja Iglesias had a good chance to level the match but his chip came back off the bar. The scare spurred Real Madrid on though and they could have found a second goal just eight minutes later. Ramos won the ball back in midfield and fed Isco, whose pass with the outside of his boot floated beautifully back towards the Real Madrid captain. His towering header was met by Diego López’s superb diving save, but from there on in Real Madrid were able to maintain their lead, keeping their opposition out for the second consecutive game. 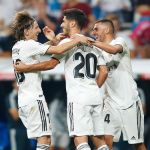