The derby finished honours even, despite Real Madrid's relentless probing throughout a thrilling second half.
Santiago Bernabéu

0
The Santiago Bernabéu played host to another pulsating and emotionally charged Madrid derby as Real Madrid and Atlético played out a goalless stalemate in a high-octane contest that proved to be quite a battle. The Whites were the better side in the second half and ended the game laying siege to the visitors' goal as they fashioned several chances to have secured the spoils. Courtois and Oblak pulled off a string of superb saves on a night that saw Vinicius Jr. make his competitive debut.

The game was a tussle of contrasting styles right from the get-go. Real Madrid looked to boss possession with patient build-up play and long spells of possession, whilst Atlético sought to win the ball back and break quickly on Courtois' goal. A Saúl effort was the first time the hosts' shotstopper was called into action, whilst Gareth Bale replied with a shot that Oblak parried away. However, the first clear-cut opening of the night fell to Antoine Griezmann, who forced Courtois to pull off a fine save after being sent clean through in the 18th minute. Three minutes later, Toni Kroos sent in a free-kick that found Bale, whose shot across goal shaved the far post.

Courtois
Every ball was being fiercely contested and this derby encounter was proving to be a tactical bout with too many stoppages. But Madrid just focused on playing their game and sought to find joy down the right through Dani Carvajal. The visitors' threat came on the counter-attack, with Diego Costa finding himself a one-on-one against Courtois in the 37th minute, but he was again frustrated by the formidable Belgian. The last chances of the half went Madrid's way as Bale tried his luck from range, before Asensio came close to breaking the deadlock after second-guessing where Oblak's clearance was headed.


The second half started with a change for the home side with Bale being replaced by Dani Ceballos. The Whites came out in search of the win. With less than five minutes on the clock, both Casemiro and Asensio created opportunities on the opposition's goal. Ceballos was involved in everything as the Whites took control of the centre of the park as they searched for a way through the Rojiblancos' defence. In the 64th minute, Modric unleashed an effort from outside the area and shortly after Asensio was one-on-one with Oblak, with the Atletico goalkeeper getting a good hand to his shot and keeping the effort out.

Last chances
The minutes kept ticking by but despite Madrid's superiority, the match remained goalless. In the final 15 minutes Real Madrid had Atlético boxed in to their own half as the home side tried to get the decisive goal and almost found a way through thanks to great combination play between Ceballos and Modric that ended in Carvajal's shot being blocked by Oblak (77'). Filipe Luis tried his luck from distance with the visitors’ first shot of the second half. Lucas Vázquez and Vinicius Jr, who made his competitive debut in the 88th minute, joined the Whites’ attack but the Madrid siege in the second half didn’t get the reward it deserved. 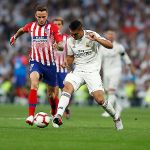