"I'm happy and very proud, it's been an absolute dream year and I hope there's more still to come", said the Croatian ace.
Luka Modric has won the UEFA Men's Player of the Year Award 2017/18 and was presented with the trophy at the Champions League Group Stage draw at the Grimaldi Forum in Monaco. The madridista beat Cristiano Ronaldo and Salah in the voting to pick up the prize, while Modric was also voted the best midfielder in last season's Champions League.

Modric enjoyed a wonderful season, winning La Decimotercera with Real Madrid and making it to the World Cup final in Russia with Croatia, where he was also picked up the tournament's Golden Ball. He also added the Club World Cup and European and Spanish Super Cups to his trophy cabinet as he made 43 appearances for the Whites, scoring 2 goals and providing 7 assists.

Modric: "I'm enjoying the best moments of my career"
"It's very special, I'm extremely happy and proud. Thanks to everyone who voted for me and to Real Madrid, this award is for all of us. It will give me even more confidence and hunger to work hard to keep winning things as a group at Real Madrid, which is the most important thing. When you start playing, you have big dreams. I wanted to make it to the very top, and here I am. I'm enjoying the best moments of my career. It's been an absolute dream year and I hope there's more still to come. I have to keep working towards that".

“We head into this Champions League campaign with humility, hard work and respect for our opposition. We're the favourites and we'll fight to do something big once again. The final is in Madrid and it'd be perfect to be there again”.

The jury for this accolade is made up of 55 journalists who represent each of the UEFA member federations, as well as 80 coaches who took part in the Champions League and the Europa League in the 2017/18 campaign. Varane (8th) and Ramos (10th), were the other madridistas in the top ten. 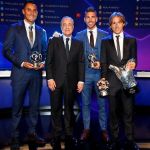