Real Madrid beat Milan in front of the home crowd thanks to Benzema, Bale and Mayoral's goals.
Santiago Bernabéu

1
Real Madrid closed out the preseason with a grand victory over AC Milan in the last test before competing in the UEFA Super Cup next Wednesday. Julen Lopetegui's new side played well in front of the fans and they were awarded with the 39th edition of the Santiago Bernabéu Trophy. Bale, Benzema and Mayoral scored the madridista goals

Exciting from the off, the fans loved it, as it was a very entertaining match, played at a fast pace for moments. The goals were not in short supply. After a Marcelo cross on 2 ', Bale connected with Carvajal so that the full-back, with space, put a strong cross onto the head of Benzema. First dangerous chance and the Frenchman's first goal in the game - the second this pre-season.

But the Italians were not scared and they responded to the goal two minutes later: Higuain, from outside the box, rifled a shot past Keylor Navas. The initial intensity continued, and Asensio and Bale tested Donnarumma before the first quarter hour, and Keylor kept the Milanese attacks at bay, stopping a Bonaventura free-kick on 26 '.

Real Madrid's grit before the break earned them a reward in stoppage time. Isco and Casemiro had tried their best prior with two shots that were off course, Bale had to take charge and rifle in the next madridista goal. On 46’, Asensio sent in a looping corner kick and the Welsh striker pounced on a loose ball into the box to put the Whites ahead.

Dominance in the second half
The whites were on top in the second half. They controlled the midfield, combining patiently to try to create some danger, against a Milan side that improved as the minutes passed. The Italians went in search of a draw, but Keylor Navas worked hard to thwart the visitors' attempts. In extra time, Mayoral killed off the game, smashing in Donnarumma's parried save from Modric. 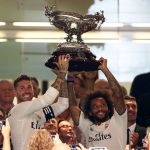