Julen Lopetegui oversaw his first training session as Real Madrid coach.
Julen Lopetegui's Real Madrid this evening got their pre-season up and running. After undergoing their medicals this morning, the European champions completed an evening session at Real Madrid City. The Whites began their preparations for a season full of challenges, in which they'll bid for glory in the Champions League, LaLiga, the Club World Cup, the UEFA Super Cup and the Copy del Rey.

Fitness and ball work
After opening the session with a series of activation exercises, the players completed a fitness circuit. Next up, they worked on ball circulation and possession and pressure in various teams. Finally, the players took part in running drills and stretching exercises. The workout was rounded off with a guard of honour to mark Gareth Bale's birthday. 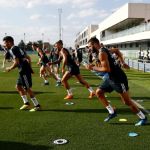