“From today, you're taking on the responsibility of coaching a team of legendary status. Today you're coming back home having achieved qualification for the World Cup in Russia with the Spanish national team in fine fashion, not losing in twenty games. It's a day of mixed feelings because you were standing before two perfectly compatible dreams: leading Spain on their quest to become world champions and coaching your beloved Real Madrid. The fans will thank you for everything, and the players just the same”.

Spanish national team
“Real Madrid reached an agreement with Lopetegui in a matter of hours, exercising both parties' liberties and always respecting the clauses and terms of his contract. We thought it should be concluded prior to the World Cup starting in the name of transparency. This is a first in footballing history, that a national coach, having come to an agreement with another team, has been considered to have behaved in a disloyal manner. Nothing could be further from the truth. We made our agreement public before the World Cup kicked off in order to avoid it being leaked, and for transparency to prevail”.

“I'm surprised because this decision could affect a dressing room full of players who aspire to win it and be crowned world champions. There is no justifiable argument as to why Lopetegui shouldn't be leading the national team out tomorrow. We're sorry they have not allowed him to fight for this great dream but today is a big day for everyone. We're signing a wonderful coach and can't wait to keep writing history together”.

Unity
“I always maintain that the most important thing is unity at Real Madrid. We have to keep working hard to face up to a movement which does nothing but attempt to harm the image of our club despite us enjoying one of the most successful periods in our history”.

Lopetegui: “It's the happiest day of my life”
“I hope I won't get too emotional. First, I'd like to express my gratittude for the trust and responsibility placed in me, which I relish with great pride. I know I'm coming to a place of great demands, and even in giving everything, you can still come up short. We're going to do everything in our power to give the best account of ourselves and fight at the level that this club belongs, and even push it higher”.

“I believe I'm ready for this adventure and to take the wonderful squad of players we have under my wing. Real Madrid aspires to win everything and I feel part of the family at this club. Yesterday was the saddest day of my life since the death of my mother, but today is the happiest”.

The presentation was concluded with a fine family photo of the new coach alongside Florentino Pérez and other Board members. 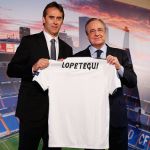