The players and thousands of fans celebrated the Champions League won together.
Real Madrid once again celebrated an historic European Cup victory and the Plaza de Cibeles was the scene of one of the most anticipated moments of the day’s celebrations. Thousands of fans crowded around the fountain to celebrate the title with the players.

The heroes of la Decimotercera went to Cibeles after their visit to the Madrid institutions. In the square, music accompanied the festive atmosphere and the Real Madrid fans showed once again their love for the players. The stage in front of the Town Hall and the canvases around the monument showed the slogans "Gracias madridistas!" and "Campeon13s".

Ramos and Marcelo offered the trophy
The team went from the bus to the footbridge over the fountain and once there the players sang along with the fans to thank them for their constant support during the season. The climax of the celebration came with Sergio Ramos and Marcelo putting a Real Madrid flag and scarf around the goddess and offering the thirteenth European Cup to Cibeles. A new historical moment to add to the album for the best club in the world. 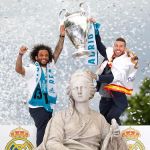