Goals from Marcelo and Asensio cancelled out Kimmich's goal, giving the European Champions advantage in the semi-final, which will come to a head on Tuesday at the Bernabéu.
Allianz Arena

2
Real Madrid have not reached the semi-finals of the last eight Champions League campaigns by coincidence. The winners of the last two European Cups showed solidity, focus and grit at the Allianz Arena to win 1-2 against Bayern to take an advantage in the tie. Goals from Marcelo and Asensio cancelled out a goal from Kimmich to get a win that Real Madrid will need to build on at the Santiago Bernabéu next Tuesday as they look to get to the final.

The game started at a frenetic pace. In just five minutes, The two team created danger in their rival's box. Kroos got close for the madridistas once. Bayern played direct football and pressed high up. Robben went off early after being felled. Thiago came on for the Dutch star on 8’. meanwhile, Zidane's side kept possession for long spells. The first shot on goal came from Rafinha on 19’, while Carvajal tried his luck too. Keylor and Ulreich kept both shots out.

Goals
When Madrid looked good, Bayern scored. A quick transition on the right meant that James got the assist for Kimmich to make it 1-0 (28’). Heynckes had to change Boateng, who again went down injured, and Süle came on. Bayern pushed on. Hummels tried to get the second with a corner, but Ramos kept out a Müller shot from within the area. Then Zidane's side hit back. On 44’, Marcelo stuck a left footed effort on the edge of the box after Carvajal set him up from the right. Before the break, Lewandowski and Müller had the chance to score from set pieces, but it went into the break 1-1.

Isco was replaced by Marco Asensio at half-time. The battle of the two teams' contrasting styles continued after the break. Ribéry fired in the first warning shot with an inviting centre which failed to find a teammate. The French winger was leading Bayern's attacking charge with his direct running. Madrid, meanwhile, were seeking to build play in their efforts to make inroads into the hosts' area. However, the game was being played at a frantic pace. The end-to-end nature of the contest saw Madrid capitalise on an error in the Bayern midfield to get their noses in front in the 57th minute. Rafinha misplaced a pass and Lucas and Asensio combined brilliantly on the counter as the Mallorca-born attacker finished with aplomb by chipping the ball into the corner of the net.

After falling behind, Bayern continued to pour forward and Ribéry forced Keylor Navas to pull off two excellent saves in quick succession. The home side's threat was coming from down the left flank and through set pieces. Madrid went on to have several chances to put the game beyond the hosts' reach. In the 71st minute, Cristiano planted the ball into the far corner, but his effort was chalked off after he had brought the ball down with his arm. Five minutes later, Karim Benzema, who had come on in place of the injured Dani Carvajal, was next to test Ulreich. On 88', Lewandowski steered the ball wide with just Keylor to beat and in injury time, Ribéry was once again denied by the Costa Rican custodian. These were to be the final chances of a pulsating game in which the European champions took victory. Next Tuesday at the Bernabéu Madrid are tasked with taking the final step on the road to the Kiev. 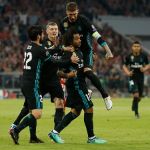