A Cristiano Ronaldo brace and one from Bale seal three points for Real Madrid ahead of their trip to PSG.
Santiago Bernabéu

1
Objective achieved ahead of the trip to Paris as Real Madrid picked up a convincing win over Getafe, dominating the game from start to finish. Bale and Cristiano Ronaldo put the Whites ahead before the break, before the Portuguese ace sealed the points in the second half, after Portillo had cut the deficit. The Whites put more points on the board in LaLiga, with Cristiano netting another brace just three days before the crunch clash with PSG.

Real Madrid were the superior side from the off. They were patient in possession, biding their time as they probed the Getafe back line in search of an opening. It was Bale who broke the deadlock with 24 on the clock, the Welshman pouncing on a loose ball provoked by Isco inside the area. At 1-0, the Whites continued to look dominant, upping the pace of their play. Cristiano and Benzema both looked to find space against opposition who were defending for their lives, only testing Navas with a single effort on target by Ángel.

2-0 at the break
Zidane's men kept up their siege of the opposition area, and on 39’, Carvajal tried his luck with a fine strike from outside the box. That was just the warning shot, and 2-0 arrived just on the stroke of half-time. A sumptuous Benzema pass found Cristiano Ronaldo, who cut inside two defenders and struck into the bottom corner with his left boot. The Portuguese forward's goal-scoring run against Getafe continues.

The second half started with two attacks from the visitors, with Damián and Rémy the authors. The French forward was dismissed on 47’ for a second yellow, after a coming together with Nacho. Ahead on the scoreboard and a man up, Real Madrid kept looking for goals. It was Getafe however, who struck next. The referee gave a penalty against Nacho after he upended Jorge Molina in the box, but the madridista claimed he’d touched the ball. Portillo made it 2-1 form the spot (65’).

Marcelo returns
Zidane gave Marcelo some minutes following his injury. In the meantime, Cristiano looked to kill off the tie. The Portuguese had a goal ruled out on 67’ for a foul. Shortly afterwards, Martínez made a last ditch save from the Whites’ number seven. He did get the goal at long last though, when on 78 minutes, Cristiano rose highest to head home a Marcelo cross. Real Madrid kept up the intensity and looked for goals til the last. In added time, Bale hit the post, before then testing Martínez following Asensio’s pass. It ended with a 3-1 win as the Whites turn their attentions to the Champions League. 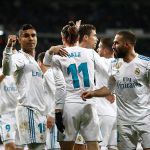