A Bale double and one from Benzema secured a convincing Real Madrid win three days ahead of their visit to Juventus.
Estadio de Gran Canaria

3
The international break, the absence of key players and the imminent return to Champions League football; none of this was enough to knock Real Madrid off their stride, as they ran out convincing 0-3 winners on their visit to UD Las Palmas. Zidane's team were much the better side, putting in a disciplined display at the Estadio de Gran Canaria, with a Bale brace and a Benzema strike enough to take all three points. Mission accomplished three days prior to the trip to Juventus for the quarter-final first leg clash.

The game started with a bang, yielding early opportunities for both sides. Bale, who looked a threat running in behind all evening, was the first to try and break the deadlock. Up the other end, Calleri and Halilovic tried their luck from outside the area, the Croatian’s effort forcing Keylor Navas into a fine save. The Whites were pressing high, stealing the ball and linking up with real panache in attack. The pressure created two great chances for Benzema and Asensio, but Chichizola was equal to them. Momo came close for the hosts with a deflected effort.

Goals
As the game switched from end to end, the madridista quality began to tell. With 26 on the clock, Modric sent a sublime long ball into the path of Bale, and the Welshman made the most of the space in behind, showing his pace and power to break through and smash home with a superb strike across goal. Soon after the goal, Nacho made way due to injury and was replaced by Achraf. At 0-1, Real Madrid continued to break forward in search of the second, and it came in the form of a penalty. Calleri brought down Lucas Vázquez in the box and Benzema, making his 400th appearance, made no mistake from the spot (39’).

Paco Jémez tried to shake things up by bringing on Jairo and Erik at the beginning of the second half but Real Madrid didn't have to wait long for the third goal. Bale, who was brought down by Ximo Navarro in the area, converted the penalty and extended the advantage after 51 minutes. On the hour mark, Zidane brought off Modric and Casemiro for a well-earned rest, replacing them with Kovacic and Marcos Llorente.

Chances
Real Madrid didn’t let up in their search for more goals, though. First, Benzema played in Bale, but his shot was deflected behind by Gálvez, before the Frenchman’s point-blank effort was repelled by an alert Chichizola. At the other end, Las Palmas tried to reduce the difference, as Calleri's header hit the crossbar in the 76th minute. The match was wide open and Bale looked to round off his great performance with a hat-trick. It wasn’t to be though and the game ended 0-3, as Zidane's side now switch their attentions to the midweek Champions League tie. 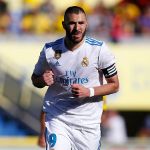