A Cristiano Ronaldo brace and a goal from Marcelo cancelled out the opener from PSG, giving Real Madrid the upper hand in this tie.
Santiago Bernabéu

1
The Santiago Bernabéu experienced yet another special European night. Real Madrid showed why they were crowned winners in the last two editions of the Champions League, beating PSG in the first leg of the last-16. The Whites eere the better side for most of the game and were able to mount a comeback after Rabiot's goal. Cristiano Ronaldo proved his mettle as king of the Champions League, scoring a brace and Marcelo made it 3-1 at the final whistle. The tie will come to a head on the 6th March in Paris. Real Madrid, the Bernabéu and the European Cup were once again, the perfect combination.

The sheer scale of the game could be felt as soon as the players took to the pitch. The fans unveiled a spectacular tifo, to match the incredible atmosphere they always provide on nights like these. Zidane's team repaid this showing with a dazzling opening to the game. Their pressing of the French defence helped them take advantage of the game. Kroos, on 5 minutes, was the first to test Areola. Meanwhile, PSG looked danerous thanks to the threat of their front three, especially Neymar.

PSG's goal
The two teams clearly respected each other but Real Madrid were taking control. Isco picked up the ball only to be felled outside the box. Cristiano hit the free kick high (26’). Shortly afterwards, a great cross from Marcelo left the Portuguese forward to face the opposition keeper, who kept the shot out with his head. Despite the chances, it was PSG who snatched a goal: Rabiot pounced on a parried ball after Mbappé fired in from the right hand side (33’).

It was time to react and Real Madrid came back in style. Firstly, Cristiano picked up another ball and fired wide. And then, good combination play between Nacho and Modric almost ended in a goal. In the 44th minute, a shot from Benzema forced the best out of Areola. Shortly after, Lo Celso brought down Kroos, giving away a penalty which was converted by Cristiano on the stroke of half time.

The pace of the game and number of chances decreased after the break. Mbappé was the first to try his luck but he was kept out by Keylor Navas. Real Madrid were looking towards Marcelo's wing, but he didn’t get a clean connection on a good chance. PSG had more of the ball than in the first half. Rabiot and Yuri were involved in two of the clearest chances for the French side.

The victory
As time passed, the effort put in it began to take its toll on the players. Zidane introduced Asensio, Bale and Lucas Vázquez. Ten minutes were still left in a match which seemed to be decided. But then came the two moments of magic from the European champions. In the 83rd minute, Asensio crossed from the left, Areola parried, and Cristiano turned home with his knee to make it 2-1. And in the 86th, the Mallorcan was involved again from the left, playing in Marcelo to get the third. Real Madrid draw first blood and go into the second game with the advantage. 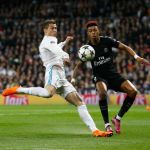