3
Just as they have shown time and again in recent games, Real Madrid have a remarkable ability to react when down, and a clinical edge in front of goal. They picked up three points at Butarque after coming from behind for the third game on the bounce. In a clash which yielded few clear-cut chances, Zidane's charges took theirs to overturn Leganés's early strike. Lucas Vázquez and then Casemiro following a spectacular team move, put the Whites back in front before half-time. Sergio Ramos then made it 1-3 when he netted a penalty in the closing stages.

It took no time at all for the game to spring into life, and the hosts were in front with their first attempt, when a corner was turned in by Bustinza after Theo failed to clear (6’). The early blow didn't affect the madridistas though, and they wasted no time in retaliating. On 11’, Kovacic threaded a ball through to Casemiro, whose subtle touch fed Lucas Vázquez and the winger pulled the ball across Cuéllar to level things up. Despite neither side dominating the play, Madrid had a dangerous air about them every time Asensio and Lucas picked up the ball close to the box.

Fine combination
As the game swung from end to end, it was the madridistas' quality that would ultimately tell. Benzema, Lucas and Casemiro linked up for the best move of the match. A wonderful one-touch triangle was finished by the Brazilian to turn the scores in Madrid's favour (29’). With 1-2 now on the board, the Whites continued to threaten the opposition goal. Isco's fine piece of individual play could have extended the lead, before Benzema had his own chance but couldn't find the target with his head. The scores remained the same going into the break.

The second half got underway with a double change for Leganés. Garitano threw on Rubén Pérez and Mantovani as he chased the comeback. It was Zidane’s side however, who controlled the game more convincingly, despite lacking depth to their play. Leganés didn’t lose hope and looked for options. In the 64th minute, Casilla made a crucial save from Beauvue as he latched onto El Zhar’s fizzing cross.

Ramos seals the deal
The game itself did not ebb and flow in the same way in the second half, but the tight score line made for a tense affair. Zidane assessed his options on the bench. Bale came on for Benzema. As the clock ticked down, Real Madrid had the ball but could not find the killer blow. Isco, on 82’, forced a diving save from Cuéllar. On 90’, Kovacic was brought down in the box by Tito. Ramos was on hand to slot home the penalty and make it 1-3 at Butarque as Real Madrid continue their winning ways. 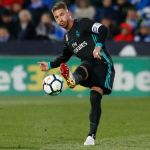