1
Zinedine Zidane's recent press conferences have seen him stress the importance of finding the back of the net and stringing together a good run of results. Today, Real Madrid responded to their manager's call in the finest possible fashion. The Whites reacted quickly after Deportivo's early goal to put on a blistering display of attacking firepower and record the biggest win in LaLiga to date. There were doubles for Cristiano Ronaldo, Bale and Nacho, as well as one for Modric, in what was a superb demonstration of the team's goal-scoring potential just three days before they look to book their place in the Copa del Rey semi-finals.

The early stages of the game followed what has become an increasingly familiar script in recent weeks. Real Madrid were in complete control of possession but struggling to create any real threat. Bale was leading the charge on the right-hand side. He was the standout man early on, but despite countless crosses into the area keeping Deportivo well pegged back, a clear shot on goal failed to materialise. Then, in an isolated foray into opposition territory, the Galicians put a cat amongst the pigeons: Adrián combining smartly with Lucas and Florin Andone to make it 1-0 to the visitors with 23 minutes on the clock.

Coming from behind
The goal spurred Zidane's charges into action, and they began surging forward and began to pose a greater threat. Two fierce headers from Cristiano Ronaldo and Casemiro were warning shots for Rubén. Marcelo would prove the difference, though, and his shot looked like levelling proceedings, only for the goalkeeper to turn it on to the post. With 32 minutes gone, the Brazilian played a neat one-two with Nacho, who smashed home the equaliser. Then in the 42nd minute, he crossed to Bale from the left, and the Welshman brought it under control, cut inside and whipped an unstoppable strike into the top corner. The 2-1 scoreline at the break was the least the madridistas deserved.

Now in the ascendancy, Zidane's troops came out after the break looking determined to put the result beyond the visitors' reach as early as possible. A Luka Modric strike from inside the area and a headed Casemiro effort nearly brought the hosts' third of the afternoon. However, Bale it was who completed his brace, with the Welshman glancing home a Kroos corner in the 58th minute. Real Madrid were now really enjoying themselves in attack, with Borja Mayoral also having a chance to get in on the act before being replaced by the returning Karim Benzema.

Goal fest
In the 68th minute, Modric slotted home to put Madrid firmly in the driving seat. The Croatian conjured up a trademark curling effort to round off a slick counter-attack and make it 4-1. There were still 20 minutes remaining and the Whites weren't done yet. Deportivo also fashioned a chance of their own, only for Nacho to intervene and deny Andone. However, all of the damage was being done at the opposite end of the pitch, where it was Cristiano Ronaldo's turn to come to the fore. The Portuguese claimed the madridistas' fifth of the game in the 78th minute, tapping home Casemiro's inch-perfect cross from point-blank range. With the Bernabéu positively bouncing, Cristiano and Nacho completed their doubles in the 84th and 88th minutes to round off the scoring as Madrid ran out comprehensive 7-1 winners. 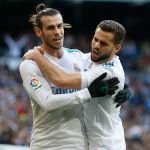