Real Madrid, who had a host of chances and were forced to play with 10 men for half an hour, failed to close out a year that has yielded five titles with a win.
Santiago Bernabéu

3
Real Madrid failed to close out the year which goes down in the history books as the most successful in the club's history, in terms of trophies secured, by claiming victory in El Clásico at the Santiago Bernabéu. The Whites, who were the better side in the opening period and continued to pour forward in attack in the second half, despite their numerical disadvantage, succumbed to defeat in their final outing of 2017. Barcelona capitalised on their bright start to the second period to hammer home their advantage and secure victory. The result was harsh on the hosts in a game which saw Zinedine Zidane's charges fashion a host of chances and in which they were forced to play with 10 men after Dani Carvajal received his marching orders in the 63rd minute.

Mateo Kovacic was the only new face in the starting line-up from the Club World Cup final. Willed on by the Bernabéu faithful that whipped up the sort of atmosphere always generated on such big occasions, Real Madrid began proceedings on the front foot. With just two minutes on the clock, they had the ball in the net when Cristiano nodded home, but he was in an offside position. The Whites sought to pose a threat down the left flank, where Marcelo and Cristiano were linking up well. The Portuguese attacker, who was heavily involved, failed to connect  with Toni Kroos' pass into the box in the 10th minute. Despite the game being short on chances, it was an entertaining affair and most of the contest was being played out in the Azulgranas' half, where Real Madrid were applying a high press.

Benzema hits the post
Whilst Zidane’s players were looking to play in a direct, attacking football, the Catalan outfit were biding their time with some patient build-up play. It wasn’t until the 30th minute when they had their first clear chance: Paulinho got the ball with his back to the defence and sent in a shot that Navas did well to send over the top. Cristiano looked to do the exact same in the next move, but his effort that was destined for the far corner was kept out Ter Stegen's foot kept. With the half-time interval looming, the two teams pushed themselves further up the field as they looked to convert their chances.

Paulinho tested Keylor once again with 39 minutes on the clock, before Benzema had the madridistas’ best opportunity just four minutes later. The Frenchman glanced a header towards goal, but it came off the outside of the post to leave the scores level at the break. After the restart, Luis Suárez was looking dangerous, forcing Keylor Navas into action on several occasions. Then, with 54 minutes gone, following a lightning-quick transition led by Busquets and Rakitic, the Uruguayan broke the deadlock. Nine minutes later and game was as good as over, as a series of blocks ended with Carvajal handling inside the box to prevent Paulinho’s shot finding its way into the net. The right-back was shown a straight red card and Messi converted the spot-kick (64’).

Chances with 10 men
Zidane’s men were truly up against it now, but the coach shifted things around, bringing Nacho on for cover at the back, as well as Bale and Asensio as he looked for a reaction. Despite the scoreline and their numerical inferiority, Madrid refused to give in. Bale could have cut the deficit 12 minutes from time, but Ter Stegen kept him out twice in quick succession. The goalkeeper was the Azulgranas' hero towards the end, standing tall to divert Sergio Ramos’ powerful strike, before Aleix Vidal made it 3-0 to the visitors in time added on. 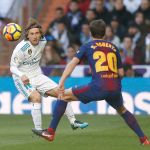