A goal from Mayoral, another from Bale after a spectacular run and a Rodrigues own goal see the Whites pick up three points against Real Sociedad.
Anoeta

3
Real Madrid showed in Anoeta why they are league champions. They came up against a Real Sociedad who went in to the game having won all their matches, but the Whites, who remain undefeated in official games, recorded a valuable victory, and the eleventh consecutive win on the road in the league, setting a new record in the club’s history. They also equalled the run of Pelé’s Santos between 1961 and 1963 of having scored in 73 consecutive official matches.

The match started very well for Real Madrid, almost going in front after just 16 minutes. Credit must go to Theo who controlled excellently out on the left wing, passing Odriozola and spotting Asensio, but the Mallorcan’s effort was kept out by Elustondo. It was only a warning as three minutes later the opener came. Sergio Ramos received in the area, controlling with his back to goal, in the tussle with Llorente the ball fell at the feet of Mayoral, who beat Rulli with his right foot.

Rodrigues equalises
Real Sociedad equalised before half an hour of the game was played. Odriozola crossed from the right and Rodrigues, on the opposite wing, beat Keylor Navas with a volley on 29'. It was game on, but that motivated the league champions even more. A cross from Asensio after 34 minutes saw Rulli make a great save from a Casemiro shot in the six-yard box.

There was more to come before the break though. Two minutes later and the visitors were back in front. In a passage of play almost identical to that which yielded the first goal, Rodrigues’ volley this time came back off the cross-bar and fell to Mayoral, who set off on a mazy run through three defenders. His cross into the box was diverted into his own net by the backtracking Rodrigues.

Chances
The second half started off at an even more frightening pace. Real Sociedad startled the Whites’ defence when Llorente rose to meet a corner, but his effort ended up in Keylor Navas’ gloves on 50 minutes, before the Whites had an even better opportunity just two minutes later. A fine Isco through ball was met with a rasping left-footed strike from Mayoral inside the area but Rulli did enough to keep it out. The academy graduate’s follow-up ended up in the side-netting.

Superb Bale goal
The game was still very much an end to end affair – that is until Gareth Bale stepped up to seal it for the visitors with 60 minutes on the clock. It was Isco who released the Welshman from deep in the centre circle, and Bale demonstrated astonishing pace to steal a march on Rodrigues, before subtly dinking over Rulli. The Brit, who has scored on all five appearances at this ground, is the highest scoring opposition player against Real Sociedad at Anoeta (6).

There was nearly time for a fourth when Lucas Vázquez was foiled by Rulli when through one-on-one on 76’, before Asensio saw his effort ruled out by the referee seven minutes later. Real Madrid bag three crucial points at Anoeta and have their attentions firmly fixed on a vital week which brings two further LaLiga ties: next up is Betis on Wednesday, before they take on Alavés on Saturday. 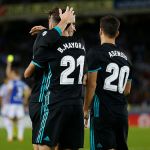