The captain’s goal in the 81st minute and Cristiano Ronaldo's before the break saw off a Betis side that went in front at the Bernabéu.
Santiago Bernabéu

1
Sergio Ramos scored again for Real Madrid in the final stages of the game, giving his side the win that sees them return to the top of the table. The Whites beat Betis in an encounter that was full of chances right from the off. Cristiano Ronaldo, with the first opportunity of the match, saw his volley turned behind for a corner by Adán in the 8th minute. Isco came close four minutes later, but his shot from the edge of the area was just inches wide.

The Whites seemed to be in control of things, but five minutes before the half-hour mark Betis went ahead. Sanabria shot from inside the area and Keylor Navas was unable to keep it out. It set up another Real Madrid comeback and they levelled things up before the break when Marcelo and Cristiano Ronaldo linked up again. The left-footed cross from the Brazilian in the 40th minute was met by the head of the Portuguese forward, whose effort was too good for Adán.

The second period proved to be just as lively, with Betis first to come close when Mandi's headed effort in the 49th minute was gathered in by Keylor Navas. From that point on, it was Madrid who set about finding a winner and they nearly struck again when Toni Kroos unleashed an effort from the edge of the area in the 63rd minute, only for his strike to fly narrowly past the post. Thirteeen minutes later it was Cristiano Ronaldo who almost put the Whites ahead, but he was foiled when clean through.

Ramos pops up again
The hosts' dominance was clear for all to see and their grip on the game would only increase after Cristiano Piccini received his marching orders after being shown a second yellow in the 77th minute. It looked as if it was only a matter of time before Madrid would get their noses in front and the goal did duly come in the 81st minute, with the Kroos-Ramos link-up once again producing the goods. The German swung over a corner and the captain leapt highest to head home and make it 2-1. In injury time, Keylor Navas pulled off a fine save to deny Sanabria's headed effort. This victory leaves the Whites top of the pile with a game in hand. 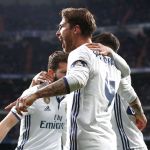