The youth-team product reaches the age of majority having lifted two league titles, two Copa del Rey crowns and an Intercontinental Cup during his time at Real Madrid.
Today marks his 18th birthday, but who would possibly believe that if they have ever seen him out on the basketball court? Flair, confidence, a great calmness, but above all a natural talent. However, his physical appearance gives his age away and his passport confirms the fact. We're talking about Luka Doncic, Real Madrid's Slovenian genius. He's a player set to mark a whole generation, a youngster who is fully deserving of his place in the history of Europe's most decorated club. He's totally oblivious to the great praise he attracts ("To keep my feet on the ground, I don't read the press"), he just continues to build a dream which all began six years ago at the Minicopa tournament. Today he is able to look back on two league titles and Copa del Rey crowns apiece and an Intercontinental Cup during his time with the first team.

"I'm living the dream", he insists as he looks back on his time as a Whites' player. This year saw Doncic "go it alone" and leave the academy residence at Real Madrid City, a place which left an impression on him. "It's perfect. It's got it all and it's really big. It's a good place to train, the atmosphere is very good, the fact that we were all together helped when we were out on the court". During his time at the residence, Doncic would spend hours on end enjoying his two major off-court hobbies: playing pool and video games.

Basketball in the genes
Doncic has lived and breathed basketball since his earliest days thanks to his father and former Slovenian international, Sasa Doncic. Aged just two months, he had already set foot on a court and at six he began playing in his hometown, Ljubljana, where he represented the youth team of the iconic Olimpija: "It was a very special period and I've got great memories of it". He quickly recalls the Torneo Lido di Roma in 2012. Aged 12, this was the starting point from which he began to forge his dream: he sunk 41 points in the semi-finals and racked up 54 points, 11 rebounds and 10 assists in the final to lead his team to the title.

A dream come true
He wasn't aware of the fact, but that masterclass roused the interest of the major clubs across Europe. None the wiser, Doncic loved nothing more than lapping up games on the TV and he felt a real affinity for Real Madrid: "My mum had told me about Petrovic and there were many players that I liked. For example, Sergio Llull, who is one of my idols. I've always liked Real Madrid".

This attraction would prove to be mutual. The heads of the academy at Real Madrid, who had already looked at Donic back in 2011, invited him to turn out at the Minicopa for the club's Infantil side: "To play for Real Madrid was one of my dreams and when I heard about it, I couldn't sleep for two or three days. Initially, I didn't believe it".

There was no doubt, it had to be Madrid
At the age of 12 he was presented with a one-off opportunity to secure his dream and he wasn't about to pass up on the chance: he scored 20 points against Barcelona in the showpiece, despite being a year younger than the rest of the players. Doncic looks back fondly on this initial contact with Real Madrid, recalling: "I really liked how everybody treated me: my teammates, the coaches and the bosses".

Spell in the academy
Doncic turned out for the Real Madrid Infantiles team in the 2012/13 campaign, where he spent three years in which he enjoyed success upon success as he claimed every title going, culminating in the Euroleague Junior crown and the MVP in Madrid in May 2015: "The Real Madrid academy is incredible, it's one of the best in the world. They're doing a marvellous job and I had really great fun during my time there. The key to success is hard work. I had some really good years and met some great teammates. I've always played with players who are older than me and I think that it's a positive thing because they teach you a lot of things, help you out and support you, and that all serves to make you a better player".

"As for the on-court achievements, I would have to single out the Junior Euroleague title, when we beat Red Star by three points in the final in Madrid". That victory marked the first time that the same club has claimed both the junior and senior Euroleague crowns. Speaking in reference to the club's ninth European Cup triumph, which the first team won in the Final Four in Madrid in May 2015 against Olympiacos (78-59), Doncic enthuses, "I was really pleased for the whole team, the coaches and the managers".

The young Slovenian didn't have things easy and joining Real Madrid brought massive changes to his life: "Initially, I really struggled because I couldn't speak the language. I didn't speak much English and there was no other teammate that I could speak to. After three months, I started to settle after improving my Spanish and my Mum came to help me. For a spell she came to Madrid each weekend and then every fortnight. I've been through some very tough times. I was still just a 13 year old, but it  has all been worth it".
Witness to the quintet-winning side
During the 2014/15 season, Doncic was playing in the EBA, but was a regular fixture in first-team training sessions. He witnessed the historic five-trophy haul secured by Pablo Laso's charges as the team marched to Euroleague, Endesa League, Copa del Rey, Super Cup and Intercontinental Cup glory: "Alberto Angulo called me and told me that I'd be training with the first team. I couldn't believe it. At the start I didn't say a word, but I now feel very comfortable amongst them. They offered me a really good welcome. They're good guys and they helped me to adapt. They gave me their support and taught me a lot of new things". 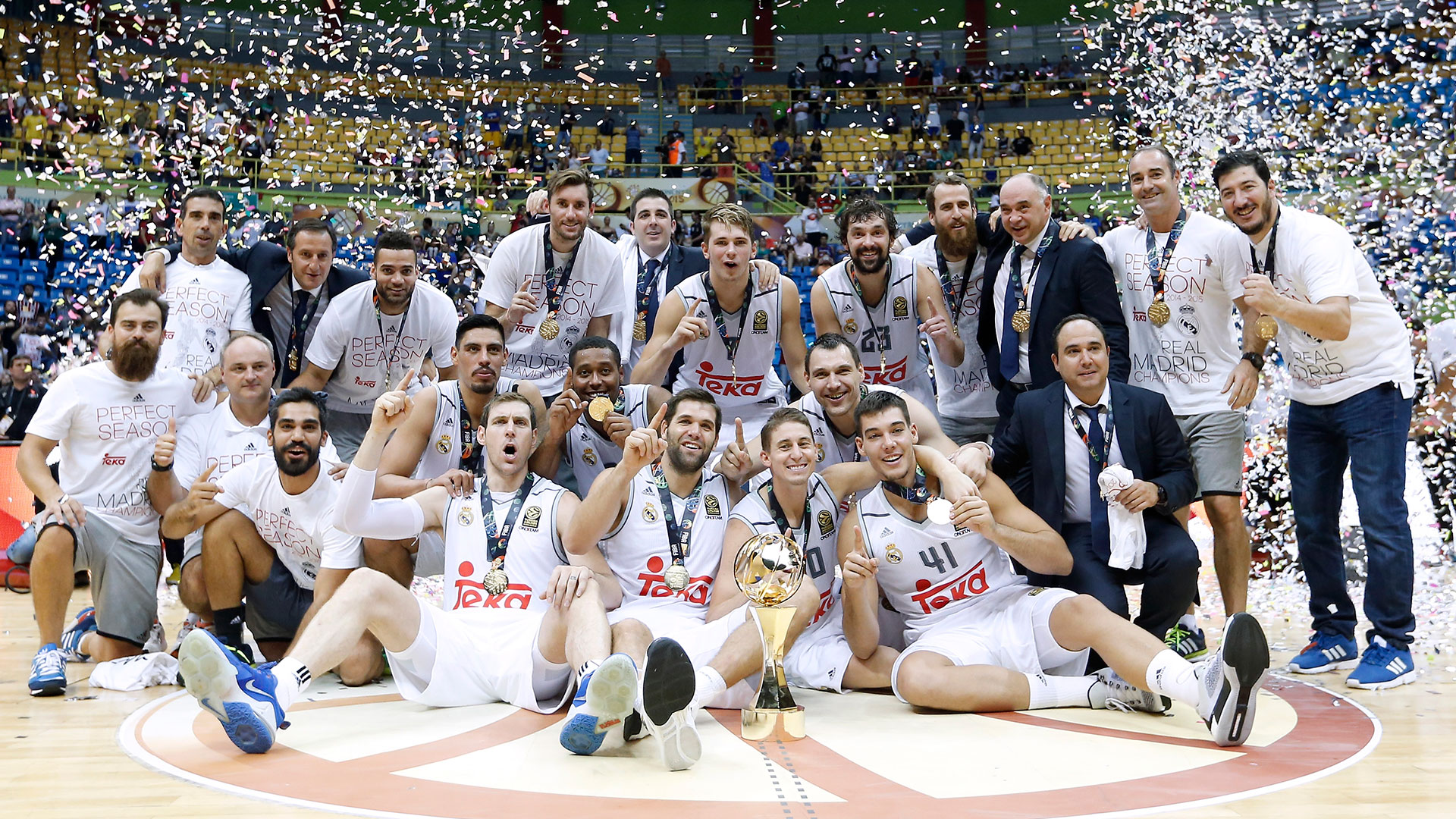 Face-to-face with his hero
At that point he met a figure who had been one of his idols, in the form of Sergio Llull. "I've got great memories of that day. When I came into training on the first day, he helped me and gave me advice. I defended against him and remember being really excited. All of my teammates have helped me from day one to settle in, but Llull is perhaps the one who has helped me the most", stated Doncic.

League bow
The next step for Donic was to go from being an additional player in training to making his debut. On 30 April 2015 against Unicaja he became the youngest-ever Real Madrid league debutant, aged 16 years and two months. He made his bow without an ounce of pressure, recalling: "I sunk a triple and didn't even know where I was. Before the game I hadn't taken note of who was the youngster player to have made their Real Madrid debut. Pulling on the first-team jersey was a dream and playing at the Palacio, in front of 13,000 people, was incredible. The fans always get behind you and we thank them for that".

Joining the first-team ranks
If there is one other defining moment in Doncic's short but intense professional career, it would be when he was told, back in the summer of 2015, that he was set to join the first-team squad. "They spoke to my agent and he was the one that called me. I was on holiday when he telephoned me and I was really raring to get back to start working with the team. I was really excited. They're all great guys and they've helped me. I think that I earned their respect on the first day and that was important. They're big stars and I needed to be strong to gain their respect".

Stunning emergence
Several months later, Doncic earned his stripes in a game played at Miribilla, home to Bilbao Basket and one of the toughest courts in the league. He led the team to a 92-99 triumph with a record points and PIR tally (15 and 22) for a player aged under 17 in a national league: "It was one of the greatest days of my life. I felt really good out on the court and I enjoyed myself".

A boy amongst men
His age is only revealed by the information contained in his passport, because when he steps out onto the court, he undergoes a transformation. Featuring in the Euroleague was one of his ambitions: "It's the second-best league in the world". A fan of CSKA Moscow point guard, Milos Teodosic, Doncic had the opportunity to lock horns with his idol in the Whites' road trip to the Russian capital last year: "He's one of the toughest players to defend against. What's more, as I youngster, I also looked at how he played and it really was very good to come up against him".

Excelling amongst the very best
"After making constant progress, Doncic has taken massive strides this term, in which he has gone from making the most of the game time he was afforded to being one of Real Madrid's leading lights in all competitions. On 5 February he racked up his 100th appearance for the Whites and twice has been named MVP of the Round in the Euroleague (the youngest-ever player to have been awarded this distinction), lighting up games with plays like the one he produced at the Buesa Arena: "They are things that just come naturally. When the opposition's fans applaud you, it makes you feel happy".

Laso, an important figure in his life
"I have a very good relationship with him. He's an incredible coach. He helps us all lots and I'm glad that he's here at the club. You can also tell that he's was a point guard and he gives you advice from that perspective and that helps me a lot", explains Doncic, who has all the hallmarks of the complete player, although his preference on the court is to lead the team: "My preferred position is as the playmaker. I like to think about the game and set the tempo, but I try to help and support the team in whatever way is needed".

Praise from the coach
"He reminds me of Bodiroga, given his physique, his vision, his ability to read the spaces and do things instinctively in defense and use his technical ability in offense. He's a sponge in terms of taking things on board and he has always been looking to improve. The first-team players know that Doncic can help them out", insisted Laso.

Targets
His aims mirror those of the team. He has recently been crowned champion of the Copa del Rey 2017  for the second time in his career, with stats that belie his years (14.6 points and an average PIR of 20.3). Doncic puts the team before himself and expresses his ambitions in the following terms: "We're very happy and that gives us the extra drive to keep working day in, day out. We want to win the two titles that are still up for grabs, the Euroleague and the Endesa League. We're really excited and we'll be giving our all to achieve those aims. I would ask the fans to keep on getting behind us. I'm certain that we'll continue to make them happy".

A staunch fan of Zinedine Zidane's Real Madrid side and a Castilla follower, teams he goes and cheers on when he gets the chance, Doncic has the world in his hands. Having just celebrated his 18th birthday, his game knows no bounds. Not even he is able to set himself any limits: "I don't know, that's a tough question…" 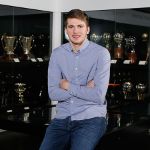