Sergio Díaz, with two, and Cedrés were the goal scorers against Real Sociedad B.
Alfredo Di Stéfano Stadium

2
Castilla got their league campaign underway in fine style with a fantastic comeback against Real Sociedad B. The madridistas put on a real show at the Alfredo Di Stéfano, as they demonstrated their character to turn the clash around after going two goals down. Santiago Solari, making his official debut in charge of Castilla, saw his men complete a remarkable recovery with a goal from Sergio Díaz in time added on to win the clash 3-2. The Paraguayan played a crucial role, scoring twice and setting one up.

The game quickly became an uphill battle for the madridistas, who conceded an early Guridi goal after 6 minutes following a misplaced pass from Luca at the back. Castilla pressured high as they looked to level things up after the early setback and it was they who controlled the pace of the match for the majority of the first half. The Basques stood firm at the back though, and ensured there were no real opportunities of note before the break.

The match was far more open after the restart and it took little time for the goals to arrive. Bautista quickly made it 0-2, converting after a block in the area, but Solari's team showed their mettle as they responded swiftly to reduce the deficit. It was Sergio Díaz who got his first madridista goal, sweeping the ball into the net after it had fallen to him following a cross from Achraf on the right wing.

Epic comeback
The Paraguayan forward was the key man once again with 64 minutes on the clock. His wonderful piece of individual play ended with him setting up Cedrés to level the encounter. These two goals in barely five minutes meant the momentum was firmly with Castilla and they kept Real Sociedad penned back until the final minutes. The relentless White onslaught reaped rewards in the 92nd minute as a Sergio Días strike from the edge of the area took a deflection off a Basque defender on its way into the net to complete the comeback. 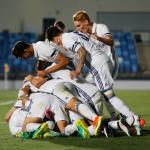