3
0
Real Madrid and their supporters once again served up a magical night of European action by overturning their first-leg deficit against Wolfsburg to secure their passage into the Champions League semi-finals for the sixth successive season. The Whites got off to a tremendous start, after bullying and pressing the opposition high up the pitch. With just 17 minutes on the clock, the hosts had already drawn themselves level in the tie. Whilst Sergio Ramos met a 6th-minute corner with a header which hit the crossbar, there was one man that was head and shoulders above the rest: Cristiano Ronaldo.

The Portuguese forward netted the opener, although Dani Carvajal deserves much credit for the part he played in the build-up. With fifteen minutes gone, the youth team graduate picked up the ball on halfway, before driving down the wing and crossing into the box. Cristiano Ronaldo stole a march on the Wolfsburg backline to fire the ball home and put Real Madrid into a 1-0 lead. Barely a minute later he had nothced his second of the night. Toni Kroos swung in a corner and the Champions League's top marksman headed home.

Benzema
The tie was now all square and there were still 75 minutes to play. Neither side wanted to make any mistakes and the hosts were fully aware that they had done the difficult part, but that a goal from the opponents would leave them having to score two more. Karim Benzema had two opportunities to give Real Madrid an aggregate lead. The first of the openings came on 29 minutes when he unleashed a shot from the edge of the area, but the diving Benaglio was equal to his effort. The second of the chances come in injury time at the end of the first half, but the French forward was unable to hit the target from within the six-yard box.

The start of the second half saw the hosts dominate possession and carve out the best chances. Luka Modric crossed on 60 minutes and Joshua Guilavogui, in attempting to clear his lines, very nearly caught Benaglio off guard as the ball looked destined to end up in the net. The goal was coming and it very nearly did six minutes later. Ramos, showing his strength in the air, met a Kroos corner, but his headed effort came off the upright, danced along the goal line and ended up in the hands of the Wolfsburg goalkeeper. It was the second time in the game that the Whites' captain had been denied by the woodwork.

Cristiano Ronaldo completes the comeback
This was just a warning shot though. The third of the night came 11 minutes later and again it came from a set-piece. Modric was brought down outside the box and Kassai awarded a free-kick. Cristiano Ronaldo carefully placed the ball and produced a masterful free-kick, sealing the comeback and claiming his hat-trick, to move himself onto 16 goals in this season's Champions League.

A fourth goal could have come on 81 or 86 minutes, but Benaglio turned efforts from Benzema and Jesé (who came on for the Frenchman) behind, after they had both cut inside defenders in the box. Real Madrid had already overturned the deficit and now it was just a case of holding out. The Whites managed to do so and they now wait to discover who they will face in Friday's semi-final draw. 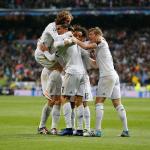