"There can be no doubt that Zidane is one of the game's all-time great figures", declared Florentino Pérez.
Zinedine Zidane is the new coach of Real Madrid. The Whites' president, Florentino Pérez, revealed the appointment at a press conference held at the Santiago Bernabéu on Monday following the conclusion of the meeting of the club's Board of Directors: "Good evening, first of all thank you to everyone for being here at the Estadio Santiago Bernabéu. I appear before you to announce the agreements just reached by the Board of Directors of Real Madrid".

"Today we have made the difficult decision, particularly for me, to terminate the contract of Rafa Benítez as first-team coach. I wish to underline that he is a great professional and a magnificent person, and I would like to take this opportunity to place on record my gratitude to him for his hard work and dedication during his months as coach of Real Madrid".

A great of the global game
"I would also like to announce that the Real Madrid Board of Directors have decided to name Zinedine Zidane as the new coach of the first team. There can be no doubt that Zidane is one of the game's all-time great figures. He knows better than anyone just what it means to lead the Real Madrid first-team squad. He's fully aware of how tough and at the same time how exciting this demanding position is. Furthermore, Zidane knows the players, as many of them lifted the club's tenth European Cup in Lisbon with him as assistant coach".

"Throughout his whole life, Zidane has shown an ability to meet football's greatest challenges, and has always tackled them with dedication and talent. Zinedine Zidane, this is your stadium and this is your club. You have our complete confidence and our support in the task of bringing excitement and entertainment to the supporters in each and every game, and the fans will be right by your side. As of now, you are the coach of Real Madrid and, for me as president, it's a source of pride to have you by my side because I also know that for you the word 'impossible' does not exist".

Zidane: "I'm going to put my heart and soul into this club"
"Firstly, I'd like to express my gratitude to the club and to you, presi, for giving me the opportunity to coach this team. We're the best club in the world, with the best fans in the world. What we have to do, and what I'm going to try to do, is make every possible effort to see this team win something this season. I'm going to work as hard as I can and to the best of my ability with all the players, and I believe that everything will turn out well. The most important thing is to get down to work with the team tomorrow".

"Many thanks to everyone. It's an important day for me, as I'm sure is the case for everyone, and I'm excited, even more so than when I signed as a player; but that's to be expected. All I can say is that I'm going to put my heart and soul into this club to try to ensure everything turns out well".

The event concluded with Pérez, Zidane, his wife and sons, and members of the club's Board of Directors posing for a series of group photographs. 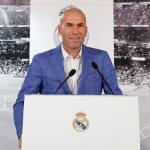