The hat-trick from the Portuguese forward, and the strikes from Benzema and James, plus a Duarte own goal in the victory over Espanyol saw Real Madrid record their seventh successive win at the Bernabéu.
Santiago Bernabéu

6
0
Real Madrid hammered Espanyol in a performance which included a first half to remember as the Whites registered their seventh successive win at the Bernabéu. The hosts made an excellent start to the game, right from the first minute it was a dominant, incisive Whites display, as the players were visibly enjoying themselves, as were the fans in the stands.The domination of the home side was such that with barely a quarter of an hour on the clock, the Whites had raced into a three-goal lead, and the game was effectively over as a contest.

Benzema opened the scoring on 7' with a headed effort to continue his fine form in front of goal. The assist came from James as the Frenchman netted his seventh in the last five games. It only took los madridistas, who were putting in a memorable display, another four minutes to further extend their advantage. A first touch pass around the corner from Benzema found Cristiano Ronaldo and just as the Portuguese was about to pull the trigger, he was blatantly hauled to the ground by Roco. Ronaldo picked himself up and made no mistake from the spot to fire home his seventeenth goal of the season.

With the supporters out of their seats and applauding each of the Whites' attacks, the Whites struck their third goal of the night. On 16' James picked up the ball on the edge of the area before looking up and unleashing a shot. His effort hit Pape Diop and the deflection caught Arla wrong-footed. Little more could have been asked of the Whites, whose display was exciting an enthused crowd. Of particular note was the applause Marcelo received after he cut inside on the edge of the area and delivered an inch-perfect crossfield ball.

Superb strike from Cristiano Ronaldo
There was still time for another masterpiece before the break, and this was the best of them all. On 45' Cristiano Ronaldo rolled Enzo Roco and shrugged the Espanyol defender as he cut inside, before evading the challenges of R. Duarte and Álvaro with two pieces of skill which were as unpredictable as they were beautiful, before firing past Arla with a thumping left-footed effort. This was the best possible way to round off a first-half display which will live long in the memory.

Unbeatable
Although they'd already achieved their objective, the Whites continued to pour forward. Benzema could have got a second, but his header on 62' was comfortably collected by Arla. The fifth goal of the night did come on 82' and it was the man of the match who got it. Teed up by Jesé, who replaced Modric - who the home faithful had given a standing ovation - , and Cristiano Ronaldo stooped to nod home, and with it registered his 35th hat-trick as a Real Madrid player. Jesé played a pivotal role in the last goal of the night as the youth product's cross was turned into his own net by Óscar Duarte as the Espanyol defender tried to clear his lines. 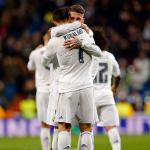