0
Real Madrid made their competitive debut in front of their home fans in free-scoring fashion. The supporters were treated to an extremely complete performance from the Whites right from the beginning. The home side went in front early on, with just two minutes on the clock. James, playing out wide, controlled the ball, lifted his head and whipped in a ball towards Gareth Bale's head. The Welshman finished off the cross perfectly from the just outside the six-yard box to get his first Real Madrid goal of the current La Liga campaign.

The Whites were a relentless and could have doubled their lead a minute later. Once again it was James who provided the pass, however, Benzema was unable to knock the ball past Adán in the resulting one-on-one. The home team were in full flow and had another chance to widen the gap in the 5th minute. Cristiano Ronaldo carefully placed the ball down 10 yards outside the box and struck a free kick that was so powerful the visiting goalkeeper could only keep the shot out with his fingertips.

More opportunities
Nothing more could be asked of Real Madrid. The Whites were a joy to watch on the pitch and the crowd voiced their satisfaction at the spectacle their players were putting on. The minutes ticked on and the home side kept looking to increase their lead. They came close to doing so again in the 35th minute. James started off a counter-attacking move which Cristiano Ronaldo kept going with a masterful dummy to leave himself with just Adán to beat, but once again the goalkeeper prevented the hosts from scoring.

On the brink of half time James popped up with a work of art. First it seemed as though the Colombian, in a very wide position, was going to send in cross with his free kick but he instead surprised everyone by blasting a pinpoint strike in off the post in the 39th minute. There was even time for Keylor Navas to shine at the very end of the first half. Rubén Castro looked like getting on the scoresheet in 42nd minute but the man between the sticks for the Whites, with cat-like reflexes, managed to grab hold of the ball just as the Betis striker was about to shoot.

A dream move
The second half could not have gotten off to a better start, just as the first half had done. Real Madrid bagged another goal two minutes after the restart. The build up to it was the stuff of dreams. Practically the whole team were involved as the ball moved from one side of the pitch to the other on various occasions as the Betis players were unable to get a touch. The assist finally came from Bale, using his right foot, with Benzema finding the target with a header.

The team were in complete control and James capped off his excellent performance in the 50th minute by getting his second of the night. The Colombian, who had already gotten off the mark and provided an assist, made the most of a Kroos long-distance effort that fell to him inside the box by flicking the ball up and smashing it into the back of the net with a bicycle kick. The Bernabéu was sent into raptures.

Navas saved a penalty
There was still time for more and Keylor Navas earned the fans' applause by masterfully saving a Rubén Castro penalty in the 60th minute. The home team could have made it five, but the post denied an acrobatic bicycle effort by Ramos from going in in the 78th minute. That acted as a forewarning because soon after Bale wrapped things up in the 89th minute with a screamer from 20 yards out. The force with which the ball smacked off the post before going in made the goal even sweeter. A perfect first performance in the Bernabéu ahead of next week's international break. 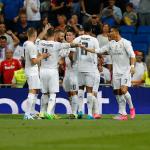