The Colombian midfielder signs for Real Madrid after winning the Golden Boot at the World Cup in Brazil.
Goals, assists, dribbling, speed, talent and versatility. James Rodríguez (Cúcuta, Colombia, 12-07-1991) embodies all of these things. Real Madrid's newest signing was one of the sensations during the last World Cup, in which he scored six times on his way to receiving the Golden Boot thanks to some truly memorable goals, including his work of art against Uruguay, which was chosen as the goal of the tournament on a FIFA.com poll.

He was his country's star man in Brazil, where he was the key behind Colombia reaching the quarter-finals in the competition for the first time ever. FIFA named him man-of-the-match in three of the five matches he played in. As well as scoring, James also provided two assists during the World Cup.

Having only just turned 23-years-old, he has already won the Europa League, doing so with Porto in 2011. Real Madrid have strengthened with the addition of a spectacular footballer, who although still being quite young, has plenty of experience under his belt having played in Argentina, Portugal and France. He is an attacking midfielder with extraordinary vision who is capable of playing as effectively out wide as he is in the centre of the pitch.


But FIFA is not the only organisation to have recognised the Colombian's talents. UEFA included his name among the 10 candidates to win the prize as the best player in Europe last season. More accolades for James Rodríguez, a player who started his career with Envigado FC in his native country, a club he made his first division debut with at just 15 years of age. From there he moved to Banfield, where he won his first title: the 2009 Apertura.

European experience
After spending two seasons in Argentina an opportunity to play European football presented itself. He signed for Porto and in three years won three Liga titles and three Portuguese Super Cups, as well as the Portuguese Cup. He made 108 appearances for the Portuguese outfit, during which time he scored 32 goals. He moved to Monaco during the summer of 2013 and just one year on from that James Rodríguez, one of the sensations during the 2014 World Cup, is now a Real Madrid player. 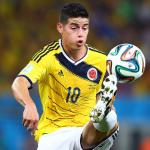