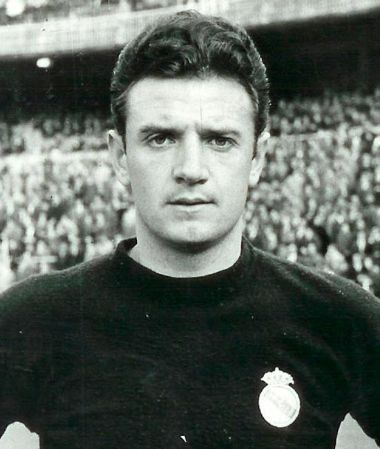 The goalkeeper for La Sexta

One of the goalkeepers during Real Madrid's famous yeyé generation, he had the honour of playing between the sticks in two European Cup finals (1962 and 1966), lifting the title at the Heysel Stadium against Partizan Belgrade. He shared the position with other great keepers such as Antonio Betancort and Vicente Train, and his agility saw him become famous for impressive acrobatic performances.

Coming in from Real Sociedad, where he played for five seasons in the Primera División, he landed at Real Madrid in 1961. The undisputed number one in his first year, he won La Liga, the Copa and clinched the Zamora Trophy. He continued to add to his honours list during his seven campaigns for the Whites, picking up a European Cup; six La Liga titles - four in a row - and a Spanish Cup.

His efforts saw him make his debut for the Spanish national side, for whom he made six appearances, including at the 1962 World Cup in Chile. He left the club in 1968 to move to Elche, where he played for three seasons before hanging up his gloves in 1973 at Castellón.