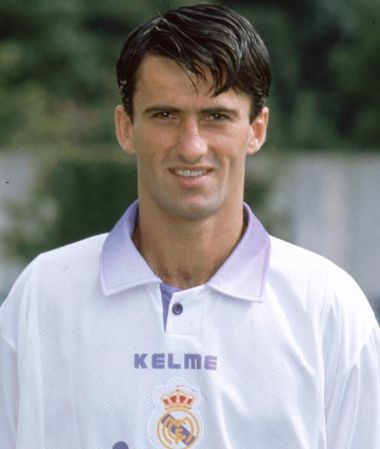 First Italian in the club’s history

Undisputed right-back since he arrived in the winter market of the 1996/97 season, Christian Panucci was the first Italian footballer in the history of Real Madrid. In our club he showed his versatility, as he also played at left-back and central defence. Powerful in the aerial game, five of his six goals in a white shirt were with the head.

He joined Real Madrid from Milan, at only 23 years old but with a lot of football experience and a track record that already included, among other titles, a European Cup. Coming through a football as demanding as the Italian and recognised in 1994 with the Bravo Trophy for the best European player under 21 years old, Panucci adapted to the Whites immediately. In fact, his debut took place in a league derby at the Vicente Calderón (1-4). Two days later he scored his first official goal as a Madridista in the victory against Deportivo (3-2). That season he was a regular in the starting line-up of the team coached by Fabio Capello, who won the league.

In the following campaign, he won the Spanish Super Cup against Barcelona and was one of the heroes of the Seventh European Cup, starter in the final against Juventus at the Amsterdam Arena. 98/99 was his last season at Real Madrid, where he won the Intercontinental Cup after beating Vasco de Gama in Japan in a match in which he also started. In 1999, Panucci returned to his country to play for Inter Milan after playing 96 matches at Real Madrid.