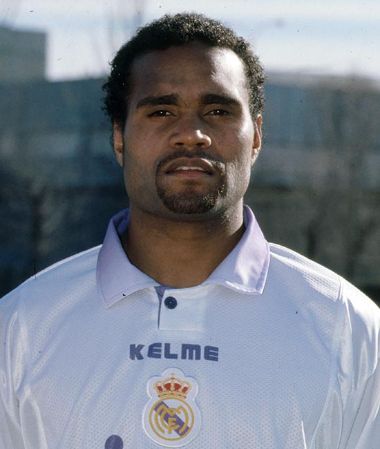 He arrived at the club in the winter of the 1997/98 campaign and his signing was one of the most complicated in the club's history, but the period he spent there swiftly became one of the most fondly remembered by madridista fans as it coincided with lifting the Séptima, which was won just four months after he joined the Real Madrid squad.

A tireless footballer with a phenomenal physique, he was a consistent performer at the very highest level. Karembeu was also fantastically versatile and while at Real Madrid he played in central midfield, inside right, centre-back and even full-back.

He was unveiled in January 1998 and so began a prolific relationship with the Champions League. He netted four goals as a madridista, all of which came in the European competition. His most memorable strike was one against Leverkusen, in the first leg of the quarter-finals that very year. He then added another to his tally in the return, before going on to strike again in the first semi-final clash with Borussia Dortmund. Karembeu was in the starting eleven in the final which yielded the Séptima in Amsterdam. Having won the European Cup, later that year he went on to lift the World Cup with France. He brought his time with Real Madrid to a close in the year 2000 after lifting the Octava.