A natural defender at Real Madrid for la Octava

A representative of the successful Real Madrid youth academy, Ismael Santos joined the club at the age of 13 and ended up playing nine seasons in the first team, where he went on to become one of the best defenders in Europe. After a hiatus in the 1991/92 campaign to play for Guadalajara, he returned to give his all for the team and was instrumental in the trophies that Real Madrid won in the 1990s, especially European Cup (la Octava).

His ability to contain his star opponents will always be remembered by the Madrid fans, as well as the huge influence he had on the game, statistics aside. Isma Santos was the ideal complement to the offensive talent of players like Sabonis, Arlauckas and others. He was a much loved player at Real Madrid due to his dedication, intensity and commitment throughout his career at the club. He also played for the Spanish national side on six occasions. 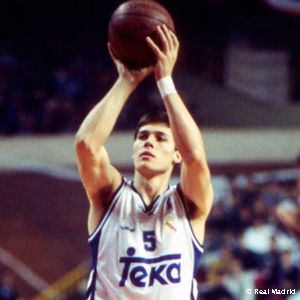