On 26 June 1993, Madrid beat Zaragoza 2-0 in the final at Mestalla.
On 26 June 1993, Real Madrid lifted its 17th Copa del Rey trophy, after defeating Zaragoza in the final played at the Mestalla stadium. Butragueño put the Whites ahead in the first half and in the 78th minute Lasa sealed the victory to clinch the trophy for the club four years after its previous cup success.

Benito Floro’s Real Madrid side knocked out Mallorca (last 16), Real Sociedad (quarter-finals) and Barcelona (semi-finals). Zamorano inspired the team to victory after scoring six goals from the seven games the Whites played on their way to the final. 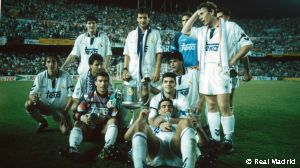