The power forward has played the sixth most games as a foreigner for the club.
Trey Thompkins made his 300th appearance for Real Madrid in the match against Joventut Badalona. The American, who chipped in with 6 points and 3 rebounds in the win, became the sixth foreigner to reach this milestone for the basketball team, after Carroll, Taylor, Bullock, Ayón and Hervelle.

The power forward is now playing his sixth season under Pablo Laso. Thompkins has become one of the team's offensive references since arriving in 2015-16. With 11 titles under his belt: 1 Euroleague, playing a key role in the final against Fenerbahçe, 1 Intercontinental Cup, 3 Leagues, 3 Copa del Rey and 3 Super Cups. His 300 games have been divided between 139 league games, 147 Euroleague games, 8 Copa del Rey games, 4 Super Cup games and 2 Intercontinental Cup games. 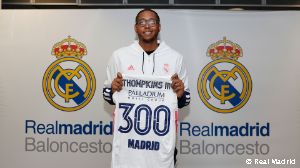