"It's really exciting to played and given my all for this shirt in 100 games ", commented the Brazilian.
​Vinicius Jr. made his 100th appearance for Real Madrid in the game against Real Sociedad. The forward, who came on in the 61st minute, scored Madrid's goal in the 1-1 draw at the Di Stéfano and at the end of the match, club president Florentino Pérez presented him with a commemorative shirt. The Brazilian said: "It’s a big achievement to play 100 games in these colours. I’m delighted and this is a very special day for me. I’ve told my family that it’s been really exciting to make 100 appearances and to give everything for this shirt, which we love so dearly".

"In the first half, we played really well, but we gave them a bit of space in the second half and they punished us for it. We’re disappointed we didn't get the win we needed. We’d aimed to win all five games before the derby, but we got a draw in the last one. We have to continue on in this vein if we want to win things this season".

Demanding schedule
"La Real are a good side that play some very good stuff. It was tough and that's what LaLiga is like. We face tough games every three or four games and we have to be focused to approach every one of them in the best possible shape".

"We'll allways give our all for this shirt, which we defend and love so dearly. We're going to keep this up and keep fighting until the last minute. We've now got a week to work on things. We'll have to look at tonight's game and be focused for the Atlético Madrid match. We'll have to perform well if we're to win".

Stats
Vinicius Jr. made his debut against Atlético Madrid at the Santiago Bernabéu on 29 September 2018 and has gone on to win one Club World Cup, one LaLiga title and a Spanish Super Cup. His century of appearances have come across five competitions: LaLiga (69), the Champions League (16), the Copa del Rey (12), the Spanish Super Cup (two) and the Club World Cup (one).

In his three seasons with the Whites, Vinicius has played his part in 58 wins and has netted 12 times. Last term was his best in terms of appearances (38) and he has featured 31 times so far this term. 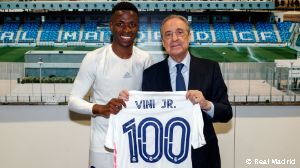