The Whites beat MoraBanc Andorra to rubberstamp their lead at the top of the standings. Tavares was the standout player in his 250th game as a madridista (32 PIR).
WiZink Center
86

79
Real Madrid secured its seventeenth victory on its return to the league 20 days after the team's last game, as two games were postponed in between. The Whites beat MoraBanc Andorra to cement their position as leaders of the competition. Tavares was decisive in the final stretch and, in his 250th game in the Madrid jersey, produced a double-double (16 points, 13 rebounds and 32 PIR). Causeur (13 points), Carroll (12) and Thompkins (11) completed a clinical Madrid attack. Taylor became the second foreigner in terms of the most appearances in Real Madrid’s history.

With Laprovittola ruled out after testing positive for COVID-19 and Llull still recovering, Pablo Laso only had Alocén as point guard (the academy product Spagnolo was included in the squad). The player from Zaragoza did not disappoint and showed his enormous potential and vision (4 points and 3 assists in 5 minutes) to help Madrid take control of the game from the opening tip-off. The Whites produced a great first quarter, finishing with a 12-point lead (24-12), largely down to their defensive solidity and Carroll's shooting precision (7 points without missing).

Madrid controlled the tempo of the game
The contribution of every player who came on the court (including Abalde, Garuba, Tyus) was essential in keeping the opposition in check, mainly Hannah and Jelinek, along with the offensive rebounding. Laso's team opened up their biggest lead of 15 points on several occasions before the 15th minute. But the visitors responded, with Dime (9 points) playing a big part, and an improvement at the back, which seemed to bring them back into the game at 41-35 three minutes later. That was when Taylor stepped up on the day he equalled Bullock’s record of games in a Madrid jersey. Together with three-pointers from Abalde and Causeur, they halted Andorra's momentum (51-38 at half-time).

The Whites looked to open the game up in the third quarter and a three-pointer from Thompkins made it 54-38 on 21 minutes. But it was not going to be so easy. There was a lack of continuity in attack in the following minutes and shooting percentages dropped considerably. Ibon Navarro's men continued to compete and took advantage of the home side's turnovers. Led by Sy (9 points), they began to edge closer, reducing the difference to 6 points. Thompkins, with 7 of the team's 13 in this period, made it 64-56 before the final quarter.

Decisive Tavares
The visitors continued to press but Madrid held on thanks to the good work by Carroll, Deck and Tavares, who began to dominate in the paint. Two three-pointers from Gielo made it a worrying 78-75 on 38'. But the Cape Verde centre was in stellar form and showed his true class. He put on an individual show in the final two minutes, stringing together decisive plays: a two-plus-one, a defence interception leading to a Senglin turnover, another offensive rebound and, to cap it all, his first three-pointer of the season for another huge performance that sealed the 86-79 victory. Laso's men close the week with a win before beginning another week of 3 games in 5 days. 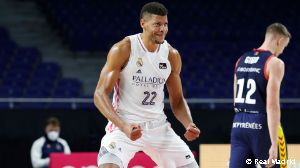 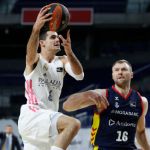