Hugo Duro levelled the game ten minutes from time but the visitors sealed the win with an 89th-minute winner.
Alfredo Di Stéfano

2
Real Madrid Castilla fell to defeat on their home debut in the league against Getafe B (1-2), failing to build on the opening-day victory over Las Rozas. The visitors went ahead on 9 minutes through a Keita strike, but Raúl's boys levelled with 80 minutes gone thanks to Hugo Duro, who netted for the second successive game. However, Julio Gracia ultimately clinched the three points for Getafe with 89 minutes on the clock.

Getafe B began the game with an impressive intensity and the first goal came swiftly after Relu won the ball back to lay on Keita, who shot across goal to make it 0-1. Despite the game becoming a scrappy affair, the Whites gradually began to take control and threaten the opposition goal. A Hugo Vallejo effort from the edge of the box with 39 minutes gone led to the madridistas' clearest chance before the break. Miguel crossed and Marvin, who was off balance, could only find the post with his shot.

Madridista goal
The game changed following half-time and the madridistas wasted no time in creating some great chances to level. Miguel struck from range but just wide of the post, before an Arribas free-kick flew just over the bar. Castilla kept pushing, Hugo Duro forcing Darío into a superb stop from point-blank range. The home side's efforts were rewarded on 80’, when César played a perfect cross on to the head of Hugo Duro, who this time found the back of the net. With the scores level, Julio Gracia popped up to make it 1-2 with 89 minutes gone. Attentions now turn to the next league game, on the road at Rayo Majadahonda. 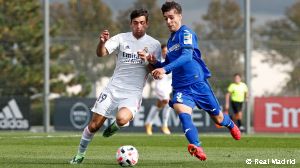 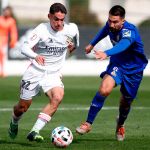