Real Madrid lifted the trophy in Nyon after beating Benfica thanks to goals from Pablo, Miguel and a Jocu own goal.
Colovray Stadium (Nyon)

3
Real Madrid are UEFA Youth League champions after getting the better of Benfica 2-3 in a thrilling final in Nyon (Switzerland). Raúl's boys clinched the madridistas' first ever title in the competition, taking the initiative from the off. The first Whites' chance came after only 9 minutes as Arribas carried the ball down the right before laying to Pablo, but his shot was kept out by Filipe. The madridistas' dominance did yield its fruits before half-time, when Arribas crossed again and this time Pablo, who got in front of his marker, was able to open the scoring to make it 0-1.

Despite Pablo picking up an injury as he turned the ball in, the goal seemed to breathe life into the team. Before the whistle blew for the break, Arribas was once again at the centre of the action to make it 0-2. A long Marvin pass found the midfielder, who whipped the ball into the box, forcing Jocu to turn into his own net past Kokubo. The second half started at break-neck pace, a sign of things to come in a thrilling 45 minutes. With 49 on the clock, Benfica cut the deficit when Gonçalo Ramos pounced on the rebound following a Luis save. Raúl's side were not thrown off their stride though, and just one minute later, Marvin skipped down the right wing and crossed for Miguel to net Real Madrid's third.

Luis López steps up
The Portuguese team refused to give up on their hopes of the trophy, as Gonçalo Ramos completed his brace from a corner to put his team right back in it once more (57’). The Lisbon side continued to look dangerous as they laid siege to the madridista box, eventually winning a penalty as the referee adjudged Pablo Ramón to have brought down Henrique Araújo, but Luis kept Tiago Dantas' spot-kick out to keep the scores at (68’). Benfica were relentless in their pursuit of an equaliser, even crashing an effort off the bar with 93 minutes on the clock, but ultimately Real Madrid were able to dig in long enough to taste European glory at this level for the first time. 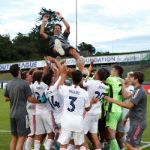