Following Iker Casillas' announcement about his retirement from professional football, Real Madrid C. F. wants to show its recognition, admiration and affection for one of the biggest legends of our club and of world football.

The best goalkeeper in the history of Real Madrid and Spanish football joined us at the age of 9. He was formed here and defended our shirt for 25 years, becoming one of our most emblematic captains of all time. Iker Casillas earned the love of madridismo and is a symbol of the values that Real Madrid represents.

Today one of the most important footballers in our 118 years of history calls it a day as a professional player, a player we love and admire, a goalkeeper who has made the Real Madrid legacy bigger with his work and exemplary behaviour both on and off the pitch.

He played 725 matches for the first team during 16 seasons in which he won 19 titles: 3 European Cups, 3 Club World Cups, 2 European Super Cups, 5 Spanish Leagues, 2 Copa del Rey and 4 Spanish Super Cups. In Portugal, with Porto, he won 2 Portuguese Leagues, 1 Cup and 1 Supercup. And he has been capped by Spain 167 times, where he won 1 World Cup, 2 European Cups and 1 Under-20 World Cup.

Iker Casillas belongs at the heart of Real Madrid and will do so forever. Real Madrid would like to convey to him and his family the love of our club, which is the club of his life. 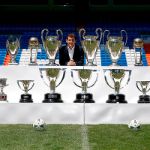